The Tanzanian Parliamentary netball team on Sunday suffered a loss from their Ugandan counterparts in the ongoing East African Community Inter-parliamentary games in Bujumbura, Burundi.

The Ugandan female legislators won the Tanzanian team with 35-14.

According to Nakaseke Woman MP, Sarah Najjuma, who is a wing attacker in the team, their win did not come by surprise.

“We worked and prepared enough for this and many more other games. I am sure our team will be hard to beat”, she said

The team is under the tutorship of Mugerwa Fred and managed by Masindi woman legislator, Jalia Bintu. Oyam woman MP, Santa Olum, is its captain.

However, in volley ball (men’s category), Uganda lost to Tanzania. The women teams of the two countries face off later today.

This is the 9th edition of these regional games played annually and legislators participate in among other games football, netball, golf and
athletics.

Last year, the games were hosted by Tanzania and Uganda became the overall winner having scooped a total of 8 trophies. 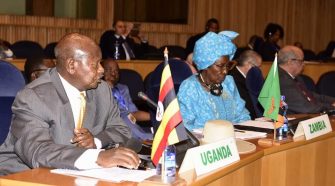