Government has approved a proposed law that seeks to tighten regulations on landlord – tenancy relations including the accepted currency and when to hike rental fees.

The Land Lord Bill, 2018 was approved by Cabinet on Monday and will stipulate the duties and responsibilities of both the landlord and tenant as well as provide a legal framework on how the rental market will operate.

This was revealed by the State Minister for Land, Dr Chris Baryomunsi during a news conference held at Uganda Media Centre on Tuesday.

Baryomunsi said that the law has been introduced in light of existing obsolete tenancy laws, to address among others issues to do with forceful evictions, high defaulting rates on the part of tenants, unilateral hikes of rent fees and violations of tenants’ rights.

“Some landlords raise rental fees up to three times a year with no justification. The new law defines when you [landlord] can increase rent and by how much,” he said.

According to the provisions therein, the law states that a landlord shall not increase rent by more than 10% in a single year.

At the core of the Bill, anyone seeking to occupy a house as a tenant will be compelled to enter into an agreement with the owner of the house, and this agreement will spell out obligations of each party.

On their part, the tenant will have a duty to keep the interior of the said property in good and clean condition, carrying out maintenance (specified repairs), paying their rent in time among others.

The Minister also revealed that under the proposed law, “the unit of rental property transactions shall be Ugandan Shillings”.

“All payments will be made in Ugandan Shillings except in situations where the landlord and tenant both agree that the rent will be made in other currencies. You will not force anybody to pay in dollars or Pounds,” Baryomunsi said.

Tenants in several shopping malls in Kampala have previously protested attempts by the property owners to impose new terms on them including abrupt rental hikes and payment in dollars. But given the liberalized nature of Uganda’s economy coupled with the lack of laws that regulate the landlord-tenant relationship left the affected tenants at a disadvantage.

Baryomunsi also said that the law will also make it mandatory for landlords to issue a 3-month notice for the tenant to vaccate the premises.

“We hope that this law will create a conducive environment for property investors to increase housing units and thus facilitate affordable housing,” he said.

With the Bill now approved by Cabinet, it is scheduled to be introduced in Parliament for the first reading within the next two weeks, before it goes to a Committe of Parliament for processing. 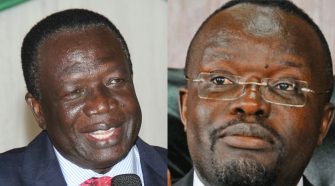