New details have emerged into the death of Bobi Wine and ‘People Power’ supporter, Michael Alinda alias Ziggy Wine. He succumbed to injuries sustained after an accident he encountered on July 21, Police says.

Ziggy Wine died on Sunday, August 4 from Mulago national referral hospital where he was undergoing treatment after being rode there by unidentified people then.

But an initial complaint regarding his disappearance had been reported at Ganda Police Post by Mugarura Patrick, his immediate neighbour on the July 27, six days after he was last seen on the July 21.

Now, on Tuesday afternoon, Enanga has told reporters at the Central Police Station in Kampala that investigations indicate that the deceased encountered a motorcycle accident on July 21 along the Northern bypass which caused injuries that led to his death.

He said Ziggy who was heading to Kyebando riding on a speeding Honda sport motorbike knocked a female victim identified as Atoro Loy, 24, a nursery teacher, at around 8pm at a place between Kalerwe roundabout and Kyebando along the Northern Bypass.

“Loy fell down and sustained very serious injuries while the rider of the motorcycle (Ziggy Wine) upon knocking her crushed into a nearby ditch on the side of the road and the motorcycle fell on him,” Enanga said.

The Police spokesperson says that both victims were thereafter picked by good samaritans who rushed them to the nearby health facility identified as Hope Clinic Kyebando where they were given first aid by an enrolled nurse identified as Kule Simon Ahebwa, 24.

Enanga says the Samaritan used the phone of the female victim who was unconscious by then to reach out to her relatives who responded immediately and transferred Roy to Kamwokya Christian caring community clinic where she was availed better treatment.

Meanwhile, Ziggy who had suffered serious injuries on the head and hand and bleeding from the nose, had no identification documents as well as a mobile phone making it hard to identify and reach his relatives.

“The medical attendant (Kule) consulted the Doctor who advised for his immediate transfer to Mulago National referral hospital. He was transferred on a Boda Boda (Motorcycle) by a rider known to Kule assisted by another medical assistant identified as Kimbowa David at around 8:30pm,” explained the police spokesperson.

“He was admitted at Mulago hospital in the casualty ward that very evening registered under number 471567/2019 and at that stage he was identified as an unknown victim of accident,” he added.

Six days later, Enanga says, Ziggy Wine’s relatives traced him at Mulago hospital and identified him as Michael Alinda who a day later transferred him to Nsambya hospital because he required a CT scan and other advanced treatment where he was admitted from July 27-30.

“Because there was no improvement, Nsambya hospital referred him again to Mulago hospital and the relatives again transferred Michael Alinda from Nsambya to Mulago hospital’s neurosurgical department on July 30. He was again readmitted under outpatient number 1679/2019 till August 4 when he succumbed to the injuries sustained due to the accident,” he added.

Contrary to media reports that one of Ziggy Wine’s eyes had been plucked out, Enanga says a post mortem examination was carried out in the presence of two relatives including his wife Tumwebaze Hilda and the victim was found to have a fracture on the skull, which injured part of the brain, his right hand had cuts on two fingers, classified as defence injuries arising out of a struggle, both eyes were present, although one side was injured.

The exhibits including the motorcycle were initially on July 21 taken to Kyebando Police post and an entry of an accident by an unknown victim was made. It was later retrieved but the number plates and the seat and other parts had had flown off.

He says the victim had a helmet but he was not putting it on at the time of the accident. The helmet together with his shoes and motorcycle number plate Number UDC 434W were also recovered. 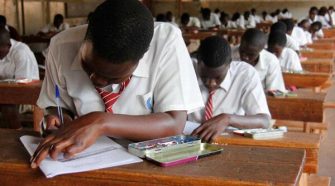