Charles Etukuri, a journalist employed by the state owned daily, New Vision has gone missing and is said to have been abducted by unknown people.

New Vision tweeted that Etukuri was picked up near the newspaper’s head offices in Industrial area on Tuesday afternoon, around 2:00pm.

“Reports indicate that a vehicle registration number UAH 038A, double cabin, white in colour, had parked near New Vision by 10:00am,” New Vision tweeted.

The vehicle is said to have been occupied by six people, five of whom were dressed in military uniform except the driver.

“Etukuri was on Tuesday abducted by armed men in military uniform. Etukuri was according to an eye witness, then shoved into a waiting car before the car sped off to an unknown destination,” New Vision wrote in an article on its website.

The journalist is part of New Vision’s investigations desk with special interest in crime stories.

Reasons why Etukuri was picked up are still mysterious but Barbara Kaija, the Editor-in-chief at New Vision said that it could be related to a recent story that he (Etukuri) wrote.

The story reported about the death of a foreign ‘investor’ from Finland named Thomas Juha Petteri, 42, who died at Pearl of Africa Hotel in Kampala days ago.

According to the story written by Etukuri, Petteri was allegedly killed by security operatives working with Internal Security Organization (ISO).

However, the ISO Chief, Col (Rtd) Frank Bagyenda Kaka denied the allegations in one of Uganda’s dailies, Daily Monitor. “That is trash,” Col Kaka is quoted to have said describing the allegations.

“For now I cannot give you details because we are still investigating. We don’t do work through the media. It is unprofessional; it interferes with the investigations,” Kaka said.

It is not clear whether Etukuri’s disappearance has something to do with these allegations.

“We don’t know where he was taken, but we think his abduction is related to a recent story he wrote about a foreign investor who died at Pearl of Africa Hotel,” the New Vision Editor-in-chief said.

She said that a case has already been filed at Police about Etukuri’s missing. 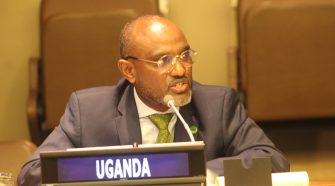