Ngora County MP, David Abala, sparked a fresh debate on the reported invasion of locusts in the country when he carried a bottle containing desert locusts in the Parliament chamber.

The whole of last week, local media was awash with reports on sightings of locusts in about four  districts in Karamoja sub-region, in North East of Uganda, although some have said the reported invasion was exaggerated.

Government had days ago confirmed that locusts had crossed into Uganda from Kenya.The local authorities in Amudat said the first sighting of the locusts happened on Sunday last week at 11am at a place called Kosike, at the border with Kenya.

They were later said to have spread further from Amudat district to other districts of Nabilatuk and Nakapiripirit.

On Monday, last week, government dispatched the initial pesticides and spraying equipment to contain the insects.

Authorities in Uganda had spent weeks preparing to deal with the invasion with Shs 15bn initially set aside to fund the response.

A few days ago, Uganda’s Agriculture minister Vincent Ssempijja warned that the worst is yet to come after the recent invasion of desert locusts in the country.

He revealed that majority of the locusts swarms that have so far been seen in the country are still breeding and not yet active enough.

On Tuesday, Ngora County MP, David Abala took to the floor of Parliament to lay on table desert locusts as proof that they have invaded a number of locusts in his constituency, adding however that there has been no government intervention.

Abala said that despite government earmarking Shs 15bn to fight the outbreak of locusts in the country, less has been done to stop their spread to other areas in the country.

However, the Minister of State for Animal Husbandry, Bright Rwamirama told the House that government is doing all that it takes to contain the locusts.

“We have secured a helicopter from The Desert Locust Control Centre and another plane is on its way. Another helicopter from the UPDF is doing surveillance of where the locusts have landed,” Rwamirama said.

Rubaga North MP, Moses Kasibante questioned whether it was procedural right for Abala to carry locusts in the House, saying it could aid further spread in the central parts of the country.

Kasibante’s concerns were re-echoed by the Government Chief Whip, Ruth Nankabirwa who demanded that Abala hands over the locusts to the Sargent at Arms to have them destroyed and the Speaker ruled in her favour.

The Speaker of the House, Rebecca Kadaga tasked the Minister Rwamirama to provide weekly updates to Parliament about the locusts.

In response, Rwamirama expressed optimism that with the windy weather, the locusts will be flying to a different country by next month. 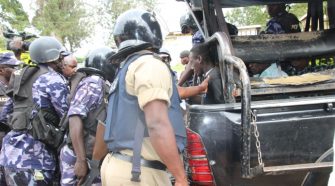