Sixteen people including a Nigerian national died on spot in a motor accident in Mayuge district along Busia Namayingo Highway, according to Police.

The accident which occurred a few minutes to mid-day on Friday happened when a taxi carrying the passengers rammed into a stationary Tata at Imanyiro village Musita-mayuge -Lumino- Busia road, killing all the occupants on spot.

Mubi says that the Taxi was traveling from Namayingo to Kampala before ramming into a stationary Tata lorry carrying sugarcane.

“All the bodies of the deceased were taken to Mayuge health Centre IV for post Morten examination,” Mubi says.

He however notes that the cause of the accident is yet to be established but inquiries are underway.

The minibus has since been towed to Mayuge Central Police Station.

According to Shilaku James, the Mayuge Resident District Commissioner who was among the first respondents to the accident, by press time, the process of identifying the victims was ongoing.

By publication of this story, 12 victims had been identified including Nabirye zaina, Musoke Muhamad from Namayingo, Musobo Patrick from Namayingo, a one Ibrah the driver, Were Christine from Namutumba, Musinguzi Micheal from Lubaga, Kansiime Prime from Kyenjojo.

Others are Christine Naiti, Barasa Micheal Pamba from Busia, Okumu Willy from Namayingo, Wegulo Bashir from Busia and Zuura Gimbo also from Busia.

Ogundiran Adeniyi Sodiq a Nigerian national is also among the dead. According to his passport found on him, he is from Ibadan Nigeria.

Shilaku told this news website that the Nigerian embassy has already been contacted for collection of the body. 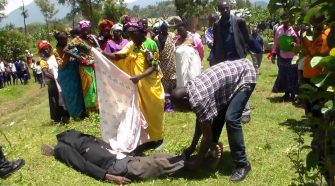 Kisoro: 89-year-old Man Collapses and Dies as He Waits for SAGE Money