Nile Breweries Limited (NBL) has Tuesday announced a Shs 505M cash contribution to support the interventions aimed at restoring the catchment of River Rwizi in southwestern Uganda whose water levels have drastically dropped in recent years.

River Rwizi snakes through 11 districts in the Ankole sub-region and is a lifeline for numerous economic activities in the region, including livestock farming, agriculture as well as human and industrial use. However, the effects of climate change coupled with the increasing encroachment on the ecosystem and subsequent tampering with the river’s catchment area have reduced the water volumes significantly.

Experts say the problem is most serious during the dry season.

On Tuesday, Onapito Ekomoloit, the Director of Legal and Corporate Affairs at Nile Breweries Ltd (NBL) told reporters that NBL which is a key beneficiary of River Rwizi, that beyond mere product (beer) sales, the brewery has turned its focus to sustainability of water which is their biggest raw material.

The Shs 505m in financial support will boost a one-year project which is being implemented by the Ministry of Water and Environment in partnership with Word Wide Fund (WWF).

Nile Breweries Ltd has a USD 90m plant (with capacity of 650,00 hectolitres per annum) in Mbarara district, situated strategically next to the endangered river. Onapito explained that water constitutes 90 percent of the final product (beer).

“As NBL, we are in the business of bringing people together. Water is life. If people don’t have water, they have no life and that means we cant bring them together. By 2025, we want all communities that are water stresses to have water sustainability”.

He added that the company’s sustainability strategy includes promotion of smart agriculture which is hinged on minimal use of water. As part of the strategy, NBL has cut down on the volumes of water used across the entire beer production process, from 7 litres (of water) for every 1 litre of beer, to only 3 litres of water.

Dr Callist Tindibagaya, the Director of Water Resources in the Ministry of Water and Environment said that upon realizing that water resources in River Rwizi were under pressure, government in 2011 formed a Catchment Management Committee. With support from the German International Cooperation (GIZ) and Cocacola, up to 500 hectares of wetlands were restored.

Martin Asiimwe who works with World Wide Fund in Ugand, said that

Studies have showed that if no intervention is made, by 2025, all economic activities that depend on River Rwizi could cease, according to Martin Asiimwe who works with World Wide Fund in Uganda.

He said that this new project will cover 210 hectares and 800 households. He noted that interventions will include restoration of vegetation and the river bank, forest and landscape in a bid to reduce soil erosion.

“If the volume kept the same, even if the dry season came, it would keep almost the same flow. If there is a reduction, it would be minimal”.

In explaining the impact of the deterioration of River Rwizi on NBL operations, Onapito said that each time the water levels go down, the brewery cannot extract the water from the river.

It instead opts for water by National Water and Sewerage Corporation (NWSC) which is costly. He added that the company also incurs a lot of costs in the process of decontaminating the water.

As the Mbarara metropolis continues to grow and industrialize, many industries and factories continue to release waste material into the River Rwizi. Some observers blame this on laxity in enforcement. 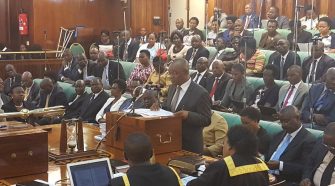