The quantities of fish varieties of Nile Perch and Haplochromines also known as ‘Nkege’ in Lake Victoria have significantly risen in the last one year, a study has revealed.

A survey conducted between September and October 2017 by Uganda, Kenya and Tanzania on the state of fish stock in Lake Victoria has reported a 30% increase in the numbers of Nile Perch. The Nile Perch fish variety has gone up to 1.12 million tonnes in 2017 from 800,000 tonnes last year.

Dr. Anthony Taabu Munyaho, the Director of National Fisheries Resources Research Institute (NaFIRRI) revealed that on the part of Uganda, there is currently an estimated 557,000 tonnes of Nile Perch in the lake compared to 393,000 tonnes in 2016.

The Nile Perch accounts for the most revenue out of Uganda’s fish exports, especially in the European market making it a valuable variety.

According to the survey, the increase in stocks is largely attributed to the stringent enforcement that has been undertaken by the armed forces in both Uganda and Tanzania to eliminate illegal fishing methods. In Uganda, operations led by UPDF officers have been seizing illegal nets and arresting those found to be using them.

The survey which was conducted on the entire 68,000 square kilometre wide lake used echo-sounders to scan and count all the live fish under the water.

Findings have also shown an increase in the locally named ‘Nkege’ (Haplochromines) variety from 500,000 tonnes in 2016 to 750,000 metric tonnes currently.

However, some of the findings are not impressive. While the stocks of the Nile Perch have gone up, the survey indicates that much of it is immature.

“Majority of the Nile Perch have remained small in size, below the recommended length (50 centimeters) for harvest. This trend has persisted for the last four years,” Dr Taabu told the press at Uganda Media Centre on Wednesday.

Since the Nile Perch has a low natural mortality rate, the survey points the cause of the small length size to over fishing. The other threat to this species is the lucrative business and high demand of Nile Perch bladders.

“People get the Nile Perch, cut it and remove the swim bladder whose value is much higher than the fish itself. These bladders are exported to China where they are said to be consumed and used for medical stitching,” he said.

The Tilapia (also known as ‘Ngege’) has also decreased in volume. This has resulted from the increasing pollution of the shore areas of Lake Victoria which Tilapia populates most and uses as breeding places.

Another regressive trend has been registered in the stocks of ‘Mukene’ (Silver cyprinid), which has reduced in volume by 50% in the last two years.

Dr. Taabu said that fishermen have overfished the shore area and less in the open waters, on top of targeting high population spots of Mukene.

Fishermen have been urged to desist from catching undersized fish varieties since some of them such as the Nile Perch take two years to fully mature.

Scientists have further recommended that fishing of ‘Nkege’ which provides food for the Nile Perch be restricted to sustain the growth in volumes of the Nile Perch.

“We are going to intesify enforcement in order to ensure that only fishing nets manufactured in Uganda are used,” Dr. Edward Mukunya, the Acting Director of Fisheries Resources in the Ministry of Agriculture, Animal Industry and Fisheries said.

Out of an estimated 400,000 metric tonnes of fish that is caught in Uganda annually, about 240,000 tonnes come from Lake Victoria alone, according to Dr Mukunya. But the trend in quantities has been going down since 2005.

Locally, Uganda consumes 223,000 tonnes of fish every year, while the remaining 17,000 tonnes is exported, earning Uganda about USD 113 million in foreign exchange. 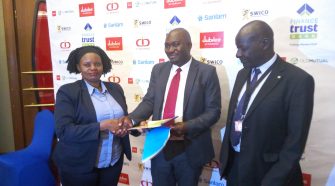