With the advent of digital technology, government of Uganda incorporated information and Communication Technologies (ICT) through its various Ministries, Departments and Agencies (MDAs) incorporated various internal and external processes to digitize service delivery, an aspect known as electronic government (e-government).

E-Governance as defined by the United Nations Educational, Scientific and Cultural Organization (UNESCO) refers to the use of ICTs in the public sector to improve delivery of information and services, encourage participatory decision making among citizens and make government more accountable, transparent and effective. The benefits of implementing e-government are instrumental as it performs various roles in the political, social, and economic sectors of Uganda. It helps to bridge the gap between citizens and government in service delivery.

According to a statement from NITA released in July 2018, the Online Service Index; a global survey that assesses the e-Government development status and measures its effectiveness in the delivery of public services of all United Nations (UN) member States shows that Uganda’s e-Government Development Index (EGDI) improved from 36% in 2016 to 41% in 2018 which places it way above the African average of 34%. This is because several MDAs have taken their services online.

On 28th May 2019 at Skyz Hotel Naguru, NITA launched the E-Government Excellence Awards to be held on 27th June 2019 at Speke Resort in Munyonyo under the theme; “Bold Digital Government Unlocking Service Delivery”, aimed at recognizing various government agencies that have played a remarkable role in availing online government services to the public.

As a publicity and sensitization campaign towards the e-government awards, NITA is currently holding an e-government expo at Garden City roof top where over 50 government agencies are showcasing their progress towards digitizing their services. I was honored to visit various exhibition stalls at this expo which was opened yesterday (20th June 2019) by the Minister of Finance, Planning and Economic Development, Hon Matia Kasaija. At the expo, I learnt a lot from various exhibitors but I personally found the National Social Security Fund (NSSF) quite exceptional and inspiring.

In a bid to enhance their operations, transparency and accountability in processes and systems, NSSF is one of the government agencies that have automated a number of their services which were previously manual. According to one of their exhibitors called Mr Andrew Muwakanya (a web developer at NSSF), being a fund that manages assets worth over shs 9.98 trillion invested in Fixed Income, Equities and Real Estate assets within the East Africa region on behalf of over two million Ugandans, digitization of their services was quite inevitable.

Prior to the integration of ICTs in managing workers’ savings, it was difficult for the savers to monitor the trend of their deposits regularly, but this has been eased with the introduction of e-statement which every customer can get online on the NSSF self-service. The NSSF has also extended other services like employee pre-registration where only non-registered members can access and register plus employer pre-registration. There is also information on contributions, Benefits and Investments, employer portal, and a customer query derives.

The Fund has also upgraded their Mobile Application dubbed NSSFGO App to include access to more self-services and improve customer experience. Some of the new features added include contributions payments for voluntary savers and employers whose payments are less than shs 4m monthly, member contacts update, retirement benefits projections, employment history, e-statement and direct contact to Relationship Manager.

The app also gives members an opportunity to track their savings in a more detailed way and hold their employers accountable regarding their contributions. This has been accompanied by other e-service channels which include, the E-Collection portal that allows employers to remit their employees’ contributions directly to their NSSF accounts through the Bank, within 24 hours, Mobile money payment platform, NSSF pay way and SMS alerts. This has improved transparency since it gives members access to monitor their accounts anytime.

In a nutshell, from what I saw and learnt at the NITA e-government expo, NSSF in my own opinion arguably stands on top in the implementation of e-government service delivery given its apparent statistics in the strides taken to achieve the 100% government goal of e-Governance.

The writer is an intern at Government Citizen Interaction Centre (GCIC), Ministry of ICT and National Guidance. 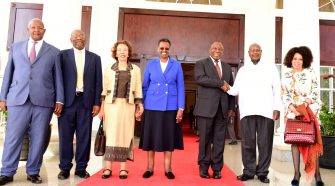