Former Commander of Special Investigations Unit of Uganda Police Force, Nixon Agasirwe has this afternoon been charged of kidnapping another Rwandan.

He has been charged together with Abdulnul Ssemujju aka Minana who was recently arrested after months in hiding.

This website reported two weeks ago that Minana had been arrested from Nabweru, a Kampala suburb by Chieftaincy of Military Intelligence (CMI) and detained in Mbuya for investigations.

The Military Court Martial on Monday heard that Nixon and Minana on August 13, 2017 at Lukooli village in Luweero district kidnapped one Vincent Kaliisa and illegally repatriated him back to Rwanda contrary to the penal code act.

The charge sheet read by the Chairman of the Military Court Martial, Gen Andrew Guti states that “armed with fire arms and grenades ordinarily a preserve of the armed forces, Abdulnul Ssemujju and Nixon Agasirwe Karuhanga repatriated Kaliisa back to Rwanda contrary to section 239 and 242 of the Penal Code Act.”

Nixon was months ago charged with kidnap and illegal repatriation to Rwanda of Lt Joel Mutabazi formely employed by the country’s Presidential Guard.

The Court Martial heard that on October 25, 2013 at Kamengo, in Mpigi district the accused using a pistol and grenades abducted Lt Joel Mutabazi and Jackson Kalemera and illegally repatriated them to Rwanda contrary to the Penal Code Act.

Joel Mutabazi, President Kagame’s former body guard had been granted refugee status in Uganda when he reportedly run away fearing for his life. 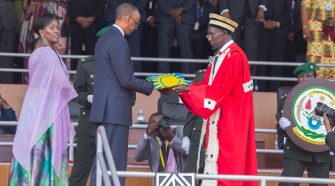