As sim card registration deadline looms, government Ministers and officials from different agencies are holding several meeting chaired by the Prime Minister, Ruhakana Rugunda to come up with a final position.

Appearing before the ICT committee of Parliament, the Minister of Security, Gen Henry Tumukunde revealed that government is yet to decide whether to uphold the deadline or give an extension.

Tumukunde said that the meeting which sat on Tuesday was a follow up meeting to a Monday one which was aimed at harmonizing government position on the matter considering all issues at stake.

The meeting was attended by the Minister of Security, the Ministry of ICT, Minister of Internal Affairs and officials from the different concerned agencies such as UCC, NIRA and NITA.

“What is greatly at stake is the security of the country. We had a meeting with the Prime Minister and we have another today; we are supposed to harmonize our position,” Tumukunde said.

Tumukunde who did not give a definitive answer to issues raised by different legislators asked the committee members to allow time to the inter-ministerial committee to come up with a final position.

“The process must be streamlined yet we are still having unsatisfactory answers coming up; allow us first to process a response because we agreed to handle it through the Prime Minister’s office and then come back to you with an appropriate position to present,” Tumukunde noted.

Tumukunde added, “We are trying to ensure that we try to satisfy all the interests at stake, allow us to first meet.”
This comes at a time after the Telecom companies wrote to the different government departments and Ministries revealing that their business is at stake since some of their customers have not registered due to lack of a National Identification Number from NIRA.

The committee chairperson, Nyakecho adjourned the meeting to Thursday calling on all the concerned ministries and agencies to attend and offer a final position. 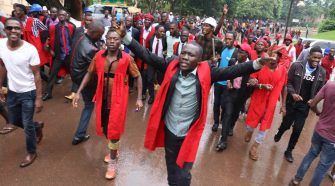