Police say they have arrested the man said to have been behind the gruesome murder of a boda boda cyclist in Rubaga Division near Kampala a week ago.

The incident which occurred in Nsiike 1, Ndeeba in Rubaga Division and capture by CCTV camera showed two individuals riding on a motorcycle killing the cyclist.

The killers posed as potential clients, attacked, strangled and repeatedly hit him with a stone to the head, killing him instantly before immediately taking off with his motorcycle.

The incident was captured on the CCTV cameras of a nearby nursery and primary school.

Police has since been pursuing the two assailants.

On Wednesday, the Spokesperson for Kampala Metropolitan Police, SP Patrick Onyango said in a statement that the suspect in the murder, identified as Mugisha John Bosco alias Mukiga has been apprehended.

“The suspect in the gruesome murder of motorcyclist (boda boda) seen on CCTV footage that circulated widely in the social media has been arrested,” the statement reads in part.

According to Police, Mugisha admits that he is the one in the video with his colleague called ‘Young Mulo’ (not the musician).

“He confessed that Young Mulo was killed by the mob on July 3 in suspicion that they stole a motorcycle” Onyango said.

Police further adds that Mugisha admitted that he and Young Mulo robbed the motorcycle from Mityana on July 2 and they were traced up to Makindye in Kampala where the mob killed his colleague. The suspect also alleged that he escaped that day and went to Kabale.

He is detained at Katwe Police station pending transfer to Old Kampala Police station. Onyango said the suspect will be charged with aggravated robbery.

“We want to appreciate our officers who carried out a quick operation after the tip-off that led to the arrest of Mugisha John Bosco,” Onyango said. 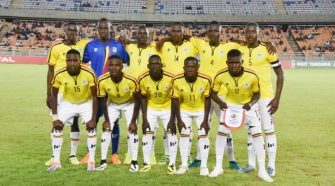