The National Resistance Movement (NRM) National Chairman, Yoweri Museveni and members of the NRM have shunned the ceremony where Democratic Party (DP) leadership handed the IPOD leadership to Forum for Democratic Change (FDC).

On Wednesday morning, members of IPOD summit including all party presidents of DP, FDC, UPC, JEEMA, NRM and the IPOD council members who include party Secretaries General of all parties and party Chairpersons were supposed to gather and witness the official takeover of IPOD leadership by FDC.

However, it took members of IPOD by surprise when one of their member, the NRM did not show up for the ceremony and did not make any communication.

It should be noted however that FDC has on several occasions snubbed IPOD meetings especially where the Head of State and Chairman of the NRM party, Museveni has been in attendance.

FDC first boycotted the IPOD meeting that was hosted by President Museveni at State House in Entebbe in November, 2018 on grounds that the meeting should have been held at a neutral ground and not at Museveni’s presidential home.

The recent summit held in May, 2019 was as well boycotted by FDC, the party claiming Museveni has continued to harass the opposition using security forces, inflating defence and classified budgets to amass campaign money and buy voters through dubious poverty alleviation tours.

Commenting on NRM’s absence from the day’s ceremony, the outgoing IPOD Chairperson who is also the DP President, Norbert Mao said that he is so disappointed in the NRM and didn’t see it coming.

“NRM’s absence gives us a poor image, we started IPOD because we had disagreements, if we were agreeing on all things, there would be no need for IPOD; these are bad manners from the NRM and I don’t know which message they are sending to us,” Mao said.

He added, “As the ruling party and key player in the dialogue process and the one with the most to gain out of this dialogue, through IPOD some of the pressures can be relieved, their absence is something that I find inexplicable.”

Mao noted that IPOD won’t give up but will continue to engage with all its members so as to inculcate the culture of dialogue among Ugandans.

On her part, the FDC Vice President Eastern Region, Proscovia Salaamu Musumba said that NRM’s action might have stemmed from a bitter exchange that was exhibited during the IPOD Women Conference at Mestil Hotel on Tuesday.

During the meeting yesterday, the NRM Women League leader, Lydia Wanyoto confronted former Minister of Ethics and Integrity, Miria Matembe accusing her of mudslinging the NRM party which is not in the spirit of IPOD.

“NRM got bitter after yesterday’s meeting. We left the meeting when we had agreed to attend the handover ceremony. We believe they are still with us because they haven’t withdrawn from IPOD,” Musumba said.

She added that NRM has invested much at the IPOD Council and believes they have no ill motive behind their absence from the meeting.

The Inter-Party Organisation for Dialogue was set up in 2010 to bring together leaders of all political shades in the country to foster a strong and vibrant multiparty democracy in Uganda based on peaceful co-existence of all citizens to work harmoniously.
Post Views: 994
0Shares 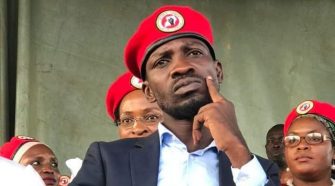