The next internal primaries of the ruling political party, National Resistance Movement (NRM) will be conducted by lining up behind candidates, their representatives or symbols.

The development follows the adoption of the proposal to amend the NRM Constitution to have voting done by lining up behind candidates during primaries by the party’s top policy organ National Conference at Mandela National Stadium on Saturday.

The proposal had Friday been passed by the National Executive Council (NEC) at State House Entebbe, whose adoption only required the National Conference to consider and pass it which has successfully happened today.

NEC’s report was presented to the National Conference delegates by the party Secretary General Justine Kasule Lumumba in the presence of President Yoweri Museveni, who is also the party’s National Chairperson.

NEC proposed that articles in the party constitution which provided for secret ballot be deleted and replaced with: “Elections shall be conducted by way of lining up behind the candidates nominated for the office or their representatives, portraits or symbols.”

The motion was moved by Kabura County MP James Kakooza. In making the case for the amendment, Kakooza said the changes would reduce financial and logistical expenses, and foster transparency.

“The method of lining up is cost effective to the budget and is one of those that can reduce the negative effects of voting. It is not expensive, it is cheap. We have also got to think aloud that much as we have the internal elections of NRM, we have have national elections whereby the campaigns are expensive and we need to save money,” Kakooza said.

“The second justification, I would say, recently we amendment the Local Government Act and held LC I elections by lining up. We did well and so, I want to say that by lining up we are being consistent with the past experience,” he added.

However, some delegates expressed disapproval of Kakooza’s attendance of the National Conference since he was elected to Parliament on an Independent ticket. It took the Secretary General and the President who involved the party’s lawyers to justify his eligibility.

SG Lumumba said Kakooza is a member of the National Conference under the category of Promoters, something that was re-echoed by the Lawyer who quoted Article 11(2) of the NRM constitution that sets out Promoters as members of the top policy organ.

The motion was later seconded by a one Asumin, female youth councillor for Sironko district who said the previous internal elections were marred by violence, rigging and cheating of the highest order. Lining up will provide a platform of physically verifying the voters and also identifying the true voters of the electoral area, she said.

She said that under the previous arrangement, electoral materials would arrive late with others areas not receiving any at all.

“They would miss out on the electoral process completely and due to that, I second the motion because it will be inclusive and all members will actively participate in the elections,” she noted.

The proposal was also supported by among other delegates the newly elected Hoima District Woman MP Harriet Businge and Ramadhan Bala, a district youth councillor for Kapchworwa district.

However, Kyagulanyi Ali from Nansana municipality proposed that the model be applied to all other candidates except members of parliament, since it will be hard for them to be at every village. But in response, the National Chairperson reminded him of the contents of the amendment which also talks about physical presence of candidates or their portraits or symbols.

Aropel Clement, a councillor from Amoro district opposed the proposal in totality on grounds that it undermines democracy since it doesn’t not allow one to take a decision in privacy.

“When we talk about democracy in this country we refer to NRM but lining up behind the candidates moreover in the 21st Century during primary elections has many underlying negative impacts on the NRM members,” he said.

“Mr. Chairman, you might not have noticed this but at the end some members might suffer with cruelty from their colleagues, therefore secrecy is one’s right – to make sure that you decide basing on your full consent and vote secretly. I am against this proposal,” he added.

The Amoro district councillor instead proposed that the constitution be amended to have positions at the Secretariat elective.

“It would have been prudent if NEC had recommended for the Secretariat positions to be elective so that they are accountable to the entire members of of the party because right now, these people only respect the accounting authority and that is you (the President),” said the Councillor amidst overwhelming cheers from the delegates.

But in the end, majority of the delegates supported and approved the amendment.

The NRM Secretariat will now proceed and generate appropriate and enabling election materials that will including Voter Education Literature. The party primaries will be conducted 5 months from now. 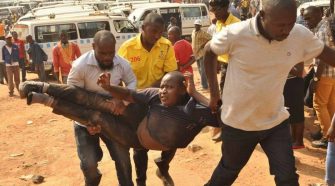