The Chairperson of the Electoral Commission of the ruling political party, National Resistance Movement (NRM), Dr Tanga Odoi, has regarded as false information making rounds on social media that the party’s internal elections to get flag bearers in next year’s general elections will be held through electoral college.

Although the NRM party constitution provides for Universal Adult Suffrage done through lining up behind candidates or their symbols and signs, NRM is yet to decide on how to conduct internal elections given outbreak the COVID-19 pandemic.

During the first CEC meeting presided over by their National Chairperson and President of Uganda, Yoweri Museveni, members failed to agree whether to line up behind candidates as provided for in the NRM constitution or adopt the secret ballot model.

As such, they postponed the meeting to Wednesday July 1, with hope that consensus would be reached. The second meeting instead differed the conclusive discussion of the party’s Road Map to a later date upon receiving information that Cabinet had approved a Statutory Instrument spelling out how Political Parties will conduct their primaries in accordance with the COVID-19 preventive measures.

Indeed, last week, Constitutional affairs Minister, Prof Ephraim Kamuntu presented to parliament a set of regulations to be followed by political parties during internal elections. They were then sent to the rules committee of parliament.

But while communicating the the CEC resolution, Rogers Mulindwa, the NRM Senior Manager Information Communications and Public Relations, said CEC will convene again after the outcome of parliament on the matter.

As such, the information which has been making rounds on social media is that CEC has since convened again and endorsed Electoral College as the mode of election by which the party shall elect its flag bearers.

However, on Monday, Tanga Odoi, said no CEC sitting has endorsed the said mode, emphasizing that their internal elections will be held as provided in the party’s constitution.

“The NRM Electoral Commission would like to categorically state that the above information is false. The Commission shall conduct the party primaries by Universal Adult Suffrage as enshrined in the Party Constitution,” says Dr Tanga.

“The Commission therefore advises and urges all party leaders and the entire NRM fraternity to ignore the false information being circulated,” he added.

Tanga adds that all elections within the organs of the NRM and regulations therein will be executed by the NRM Electoral Commission as mandated by their party constitution.

He said the Commission will release a Roadmap for the party primaries upon approval by CEC. 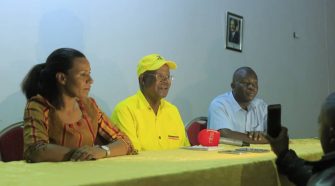