The Ruling National Resistance Movement (NRM) has Wednesday released a roadmap for the 2021 general elections, indicating that the party will conduct nomination of Presidential candidates in August 2020.

While addressing the press at the party’s headquarters in Kampala, NRM Secretary General, Justine Kasule Lumumba, who was accompanied by other members of the Central Executive Committee, said the issuance of the roadmap is fundamental in explaining the upcoming electoral activities and the different time frames for the party.

‘’This is a major milestone in the politics of this country as we continue practising democracy. They are majorly issues to do with accountability for the term which we are serving now, but most importantly, what activity will happen when we seek mandate to continue leading this country in the various offices or unseat those we were not able to win as NRM,’’ Lumumba explained.

The released program indicates that the party has already embarked on mobilisation of NRM members, to participate in the National Identification Registration Authority (NIRA) registration exercise up to February. The NRM (caucus) as well is expediting the enactment of enabling laws and creation of constituencies till May and carrying out Political assessment across the country before the end of March.

Lumumba says demarcation of constituencies and electoral areas and reorganisation of polling stations will be done between April 17 and May 7 this year before publication of new constituencies on June 26. The NRM membership register will be done between April and August 2019 followed by mobilizing members of the NRM fraternity to participate in voters’ register exercise between October, 2019 and January 2020.

Voters’ register will be displayed at all demarcated polling stations from March 19 to April 8, 2020 before conducting primaries for special interest groups from April to May 2020 and thereafter, hold Parliamentary and local government primaries between May and June the same year.

The elective national conference will be held in June and later, the party will launch its manifesto on August 15, 2020.

The NRM’s roadmap comes nearly two months after the release of the Strategic Plan and Roadmap for 2021 general elections by the Electoral Commission (EC).

In December, EC indicated that nomination of Presidential candidates will be done on August 20 and 21, before holding presidential campaigns September 2 and January 9. Campaigns for Presidential and local governments will begin in August 2020 until January 2021.

The elections body further indicated that polling for Presidential, Parliamentary and Local government candidates will be done from January 11 – February 9, 2021.

Asked about the budget for conducting the various activities, Lumumba said that this will be determined after demarcating and ascertaining the actual number of constituencies and polling stations.

‘’We don’t have a full budget for all these activities because determining the cost of some of these activities will be done after the National Conference of the NRM has taken a decision. The cost of a secret ballot is not the same as that of lining up, and the budget for the current number of constituencies and sub-counties is different from one required after creation of new ones,’’ she said.

On the sticky issue of electoral reforms, which have for long been emphasized by the opposition, the NRM Secretary General downplayed accusations that her party has deliberately sidelined the issue. She said government is in the final stages of introducing the electoral amendments.

‘’You are talking about the electoral reforms and ruling by the Supreme Court. We have already said in in our roadmap that – the caucus will expedite the enactment of enabling laws and creation of constituencies if necessary and these are to enable elections go on well. It should be concluded by the end of May,’’ she said.

“This is the first time we are having CEC coming out with a roadmap to whip the Executive to whip the Caucus to make sure everything is done in time. As you remember last time, electoral reforms were brought by all those who had proposals to the committee when we were moving towards nominations for the presidential candidates and that caused challenges,’’ she added.

She said that this time, NRM seeks to have everything done early so that there is no room for excuses.

Asked whether she was privy to media reports that the NRM CEC discussed President Yoweri Museveni’s succession, Lumumba instead dismissed these reports as false. 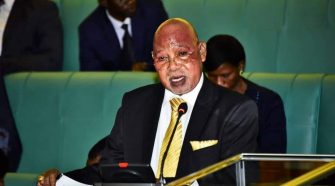