The National Resistance Movement (NRM) Electoral Commission (EC) has announced November 21, 2018 as the polling date for the pending primary elections for the newly created 6 districts and the old district of Hoima.

The announcement was made by the Deputy Chairperson of the NRM Electoral Commission, John Arimpa Kigyagi while addressing the media in Kampala.

Kigyayi first apologized to all NRM cadidates in the said districts who had been successfully nominated for Parliament and LC 5 but were disorganized when the party postponed the polling to a later date.

“Following the NRM EC postponement of the party primaries that had been slated for August 8, 2018 for Women Representatives of Parliament and LC V Chairperson, the Commission hereby announces November 21 as the new polling date,” Kigyagi said.

Kigyagi said that a number of issues ranging from lack of enough logistics to funds, led to the postponement of the said elections but these have since been addressed.

“We are set to hold primaries in the 7 districts of Kwania, Kassanda, Kikuube, Nabilatuk, Bugweri, Nabilatuk and the old district of Hoima, having acquired all the relevant resources,” Kigyagi said.

Kigyagi noted that there will be no new nominations and campaigns since these were done before the postponement. However, candidates will be allowed time to hold consultative meetings with their supporters as a way of reviving their bid for the polls.

He appealed to all NRM District Elections Officers, candidates, district party leadership, security and the entire NRM fraternity in the 7 districts to prepare accordingly to ensure that the party wins all the positions. 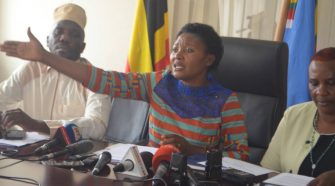