The ruling political party, National Resistance Movement (NRM) have said they did not receive an official invitation to witness opposition political party, Forum for Democratic Change (FDC) taking over leadership of the Inter Party Organisation for Leadership (IPOD).

IPOD is a platform that brings together parties with representation in parliament including the National Resistance Movement (NRM), Uganda People’s Congress (UPC) and Justice Forum (JEEMA) and is supported by the Netherlands Institute for Multiparty Democracy (NIMD).

The IPOD leadership rotates among subscribing the parties. The term of DP expired on September 20, 2019. DP was expected to handover the IPOD leadership to FDC but this didn’t happen then as the former claimed that FDC had not been committed to the organisation, thus doubting their commitment to the leadership.

Mao would later sa his party was to engage FDC leaders on the issue and then hand over to them before the end of this month, the event which happened today.

Surprisingly, all presidents and secretary generals of IPOD members were present to witness the event except those from the NRM, who as well didn’t did not make any communication.

In his address, the outgoing IPOD Chairperson who is also the DP President, Norbert Mao said that he was so disappointed in the NRM and didn’t see it coming.

“NRM’s absence gives us a poor image, we started IPOD because we had disagreements, if we were agreeing on all things, there would be no need for IPOD; these are bad manners from the NRM and I don’t know which message they are sending to us,” Mao said.

He added: “As the ruling party and key player in the dialogue process and the one with the most to gain out of this dialogue, through IPOD some of the pressures can be relieved, their absence is something that I find inexplicable.”

However, NRM says their absence was not deliberate, but the party did not get any formal information about the event from the IPOD Secretariat.

In an interview with SoftPower News on Wednesday afternoon, NRM’s Communications officer, Rogers Mulindwa, said there was no reason for them to snub IPOD engagements.

“We did not receive a formal and official invitation, I have cross-checked with the Secretary General (Justine Kasule Lumumba) who only had a WhatsApp message which she got on Monday hinting on this event. Our assumption was, a confirmation would be sent thereafter, something they didn’t do,” Mulindwa told this website.

He explained that he had checked with the party’s liaison officer (an officer for every member party who links its Secretariat to that of IPOD) on whether he had received the invitation.

“He told me that he learnt of the event this morning (Wednesday)”.

He said the use of WhatsApp is not the way the IPOD Secretariat has been communicating for all other events before.

Before taking over leadership of the organisation, FDC had shunned two IPOD Summit sittings on claims of failure to implement resolutions of the previous engagements.

Justifying their failure to turnout for the recent Summit in Entebbe in May, the party spokesperson, Ibrahim Ssemujju Nganda, said they were sceptical about whether IPOD will ever yield any agenda. He said it was very unfortunate that over the years, despite proposals made by IPOD, the government has not shown any commitment.

But, Mulindwa says even at the helm of IPOD, FDC should not set the agenda for IPOD.

“We want to welcome FDC into the chair but we would only warn that we have heard a lot of excitement. FDC will not set the agenda for IPOD. For any agenda to be discussed by either the Summit or the Council must be agreed upon by all stakeholders,” he said.

Asked to expound on the cause of fears that FDC intends to draft the Summit agenda, Mulindwa said that FDC leaders including the party president, Patrick Oboi Amuriat and spokesperson Ssemujju Ibrahim Nganda have severally put demands for them to take part in the Summit sittings including wanting to remove President Museveni from power.

“I am giving them a reminder that a single party can not set an agenda for IPOD to discuss,” added Mulindwa. 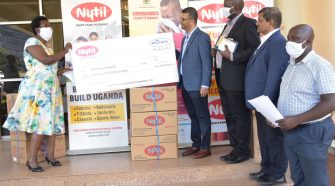