The Member of Parliament for Kasambya county, Gaffa Mbwatekamwa of the ruling NRM party has announced he will not seek re-election as MP or any other elective political position until President Yoweri Museveni steps down.

The controversial MP who strongly opposed the repealing of the Presidential age limit from the constitution in 2017 says he can no longer serve as an MP when the powers of the Parliament have been usurped by self-seeking individuals.

He told the press on Tuesday that Parliament no longer holds any power except for serving as a rubber stamp for policies that President Museveni wants passed.

“Parliament no longer wields any power. We are only used as a rubber stamp for individuals who have their dealings,” he said.

“Take for example the OTT tax [social media tax]. There was an offer for Shs 15m for every MP who backed it. I got to a point where I was offered Shs 600m to support that law. So those who think my decision to quit Parliament is mere theatrics, I don’t need Museveni to offer me anything,” Mbwatekamwa said.

He says that it has increasingly become difficult for Parliament to change anything under the current system if it doesn’t suit the desires of the President. Instead, legislators have turned into cash cows to their constituents due to the desperation as a result of poverty, he says.

“The people I represent continue to become poor and they look at me as the solution to every problem they face. MPs now shy away from functions in their constituencies. They have resorted to using cars with tinted windows due to the demands by the people they represent,” he said.

Mbwatekamwa, who has been in Parliament for only one term, said nothing will change his mind about his unprecedented decision, except if President Museveni leaves power.

“I have resigned from politics until Museveni steps down. The only way I can honour his invitation is if he tells me he has identified a successor that we as the NRM should back. And I don’t care if that successor is his wife or son”.

“I made this decision with a sound and sober mind. Nobody forced me. If I backtrack on my position, take me to Butabika hospital”.

The Kasambya county legislator says he intends use his time after his tenure in Parliament to mobilize Ugandans under the ‘People Power’ movement which is led by singer and legislator, Robert Kyagulanyi alias Bobi Wine.

“I pray that Bobi Wine stands for President, because there is no way I am going to vote for Museveni”.

Within his NRM party, Mbwatekamwa has always been viewed as an outsider, given his criticism of the official party positions. In October 2017, he together with other NRM MPs; Theodore Ssekikubo, Barnabas Tinkasimire, John Baptist Nambeshe, Patrick Nsamba, Sylvia Rwabwogo and Acidiri James were forced out of the NRM Parliamentary caucus.

The NRM chief whip cited the legilators’ dissenting views to the age limit amendments as the justification for sidelining them in the meeting. 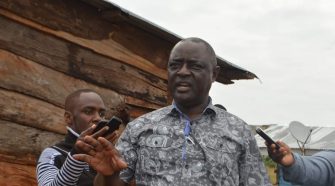