The top organ of the ruling National Resistance Movement (NRM) has resolved that President Yoweri Museveni should be the party’s flag bearer in the 2021 Presidential elections.

The move was reached on Tuesday during the closing of the retreat of NRM’s Central Executive Committee (CEC) at Chobe Safari Lodge in Nwoya district.

The meeting which opened on Saturday has been presided over by the party’s national Chairperson, President Museveni.

According to Rodgers Mulindwa, the NRM communications officer, CEC resolved to “emphatically recommend to the members of the movement and its organs” that President Yoweri Kaguta Museveni “continues leading the movement and the state in 2021 and beyond.”

A communique by the NRM says the resolution is intended to enable the party eliminate bottlenecks to transformation in the country.

The resolution now awaits approval by the party’s National Delegates Conference and the National Executive Committee (NEC) and if passed, it will see Museveni run for presidency for the sixth consecutive term since 1996 when first elections were held. He has been leading Uganda for over three decades.

In June last year, court in Uganda cleared the way for President Yoweri Museveni, 74, to run again for presidency, when it upheld a constitutional amendments by Parliament that scrapped presidential age limits in December 2017.

But a Bill removing the age cap was introduced in Parliament in September 2017 and signed into law three months later, sparking demonstrations and outcry from the opposition which accuses Museveni of a power grab.

Dr Kizza Besigye, of the opposition, Forum for Democratic Change (FDC) has run against President Museveni for four times now.

FDC party spokesperson, Ssemujju Ibrahim Nganda told SoftPower News on Wednesday that he is not surprised about the decision.

“NRM is run like a kiosk and President Museveni is the kiosk manager. Whatever he tells them is what they endorse. I am not surprised at all, they are simply following up on their decision to have him stand again, after removing the presidential aga limit in 2017,” Ssemujju said.

He says Ugandans need to understand that the issue of governance, is nolonger an NRM – Museveni affair, saying the country needs to handle it as a whole. 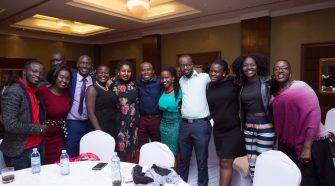