NSSF has announced its sponsorship for the 2018 KAVC International Volleyball tournament with up to Ushs 130M to mark the 10-year partnership.

The tournament that takes place from 3rd to 5th August 2018 at Lugogo Indoor Stadium marks 10 years since NSSF entered into a partnership with Kampala Amateur Volleyball Club (KAVC) to promote the development of the game of volleyball, which was lagging behind other sports then.

Unveiling a Ushs 130 million sponsorship package, NSSF Ag Managing Director Patrick Ayota told the media at Workers House in Kampala that the sponsorship increment is meant to support a bigger and better tournament that is expected to attract more local and regional teams.

“Our sponsorship is premised on the view that although we are primarily a social security Fund, we recognise that we must be a “Good Corporate Citizen”, playing a role in the sustainable development and well-being of the community in which we do business. I am glad that we have seen significant milestones as a result of this partnership”.

“More importantly, the sports fraternity is much more aware of the importance of social security and the significance of the culture of saving in Uganda both at individual and national level. We have reached over 10,000 people since 2014 through our customer service tent during the tournament,” Ayota said.

He said that the Fund continues to support the tournament because KAVC has demonstrated good accountability, professionalism in management of the tournament and integrity in delivering value for money

KAVC President Amon Ainebyoona appreciated NSSF for its commitment to contribute to the growth of the sport through sponsorship of the tournament over the last 10 years.

“We have managed to reach international level all thanks to the support that NSSF has put into building volleyball. With continued supported from NSSF and dedication of KAVC, we have a vision of playing at international tournaments like the FIVB Volleyball World Championship. the Olympics and Common Wealth Games.”

“This tournament has been a lynchpin for Ugandan players who have joined professional ranks after being scouted at the NSSF KAVC International. These include Cuthbert Malinga in Bulgaria, Daudi Okello in Turkey, Saviour Atama and Ivan Ongom in Rwanda. I am confident to say all the 4 players in Europe and elsewhere playing professional volleyball have NSSF KAVC International to thank for those contracts”, Ainebyona said.

He added that the tournament has exposed Ugandan teams to top level competition in the region, and the sport has grown at the grassroots with primary schools’ competition, and sitting volleyball (for the disabled persons) every year now being part of the tournament. 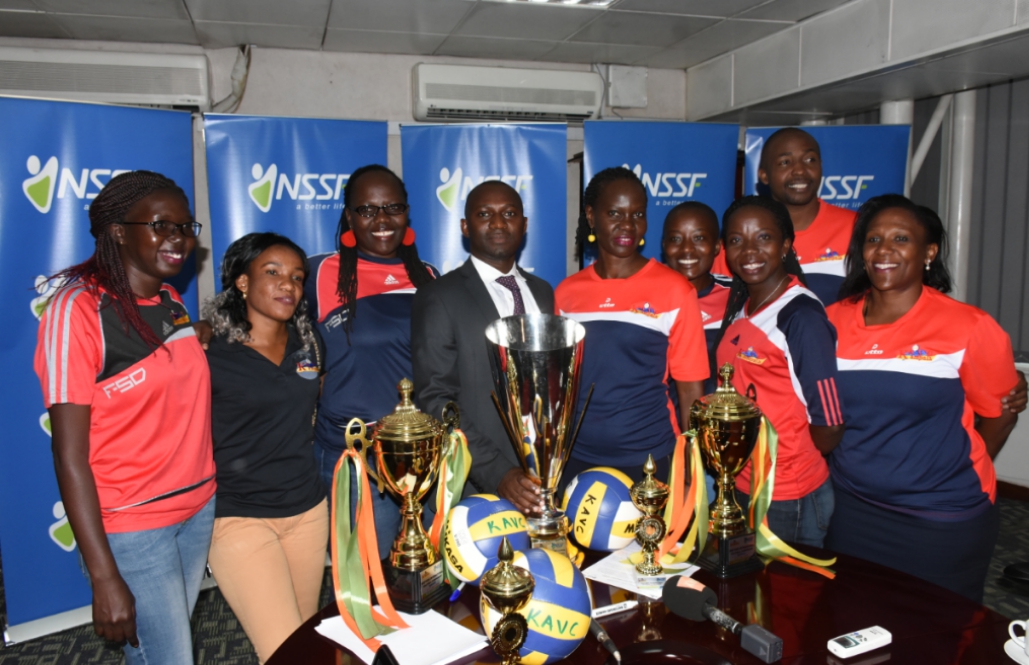 Over 30 teams from Uganda, Kenya, Tanzania, Rwanda, South Sudan and Burundi will participate in this year’s tournament, including defending Men’s Champions APR and Women’s Champions Rwanda Revenue Authority, both from Rwanda.

The tournament will also include a primary school championship where the top two finalists in the U12 and U14 (Girls and Boys) pre- qualifying games held on 22nd July will play during the main tournament.