National Social Security Fund (NSSF) has commissioned construction of the 2,740 unit housing project in Lubowa, Wakiso district, in an effort to expand its investment portfolio and give its members competitive returns on their savings.

The real estate project, which will cost an estimated USD 400 million over a 10-year period, will be developed on the Fund’s 565 acres of land along Entebbe Road and will be one of the most upmarket housing estates in Uganda.

Speaking at the ground breaking ceremony on Tuesday in Lubowa, Richard Byarugaba, NSSF Managing Director said that the housing estate is in response to demand for quality housing for Uganda’s middle class, as well as an investment opportunity that will deliver competitive returns on members’ savings.

We can only fulfill our promise to grow members’ savings in real terms, continue to grow and become a profitable Fund by taking bold decisions like the one that we have taken today. The real estate market is still profitable and gives an opportunity to diversify our investments, said Byarugaba.

Last Year, NSSF paid a 12.3% interest rate on members’ savings, and is set to announce a new interest rate at the 5th Annual Members’ Meeting this Thursday.

Byarugaba said that the Fund will make an initial investment for Phase I, after which the project is expected to be self-financing with projection to complete the first phase in three years.

The development will have retail and offices space, school, hospital, leisure and commercial areas, police and fire stations and places of worship, a central Park and a plantation Garden Park, creating a desirable environment for the residents.

He also noted that once complete, the houses will be sold on the open market to both the Fund members and the general public. However, priority will be given to the members at prevailing market rates at the time of completion of the project.

Speaking at the event, Evelyn Anite, the State Minister for Investment and Privatization, who was the guest of honour, commended NSSF upon commencement of the landmark project and investing in a robust housing market which is in in line with Government’s plan to provide decent housing for Ugandans.

This is a well thought out, well planned housing estate that meets high standards of urban planning and it ensures that Ugandans will have quality housing. Well planned housing projects such as these will contribute greatly to the transformation of our country.

The planned affordable housing projects include off taker projects in and around Kampala, 5,000 housing units project at Temangalo, Wakiso, and a planned estate in Nsimbe land, which the Fund recently redeemed back and acquired in totality.

Byarugaba said however that even though Real Estate was a viable venture, the Fund would continue to diversify its investments thereby minimizing any risks within its asset classes that can impair the Fund’s ability to achieve its investment objectives.
The Fund which currently boosts of Ush 7.9 trillion in assets also increased its stake in power utility firm, Umeme, to 23 per cent up from 15 per cent by making an additional investment of about Ush 59.4 billion and is also the largest institutional investor on the Uganda Securities Exchange.

The Lubowa Housing estate will also address the current challenge of housing deficit in the country which continues to grow by an estimated 300,000 units per annum, currently standing at about 2 million units, according to the 2015-2020 National Development Plan.

Ugandans Holding Onto their Money, Bad for Economy – Central Bank on Covid-19 Impact 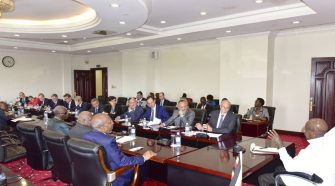