The National Social Security Fund (NSSF) has Friday announced that it will pay its members an interest rate of 11 percent for the year 2018/19, which is a 4 percent reduction from what was paid the previous year.

The announcement was made by the Finance Minister, Matia Kasaija at the NSSF Annual Members Meeting held at Kampala Serena Hotel.

This new rate will be calculated and credited on the balance outstanding on the members’ accounts as at 1st July 2018, in accordance with provisions of the NSSF Act.

Kasaija said the 11 percent rate is higher than 6.7 percent, the 10 year average rate of inflation and is also higher than annual inflation of 3.4 percent recorded last financial year. 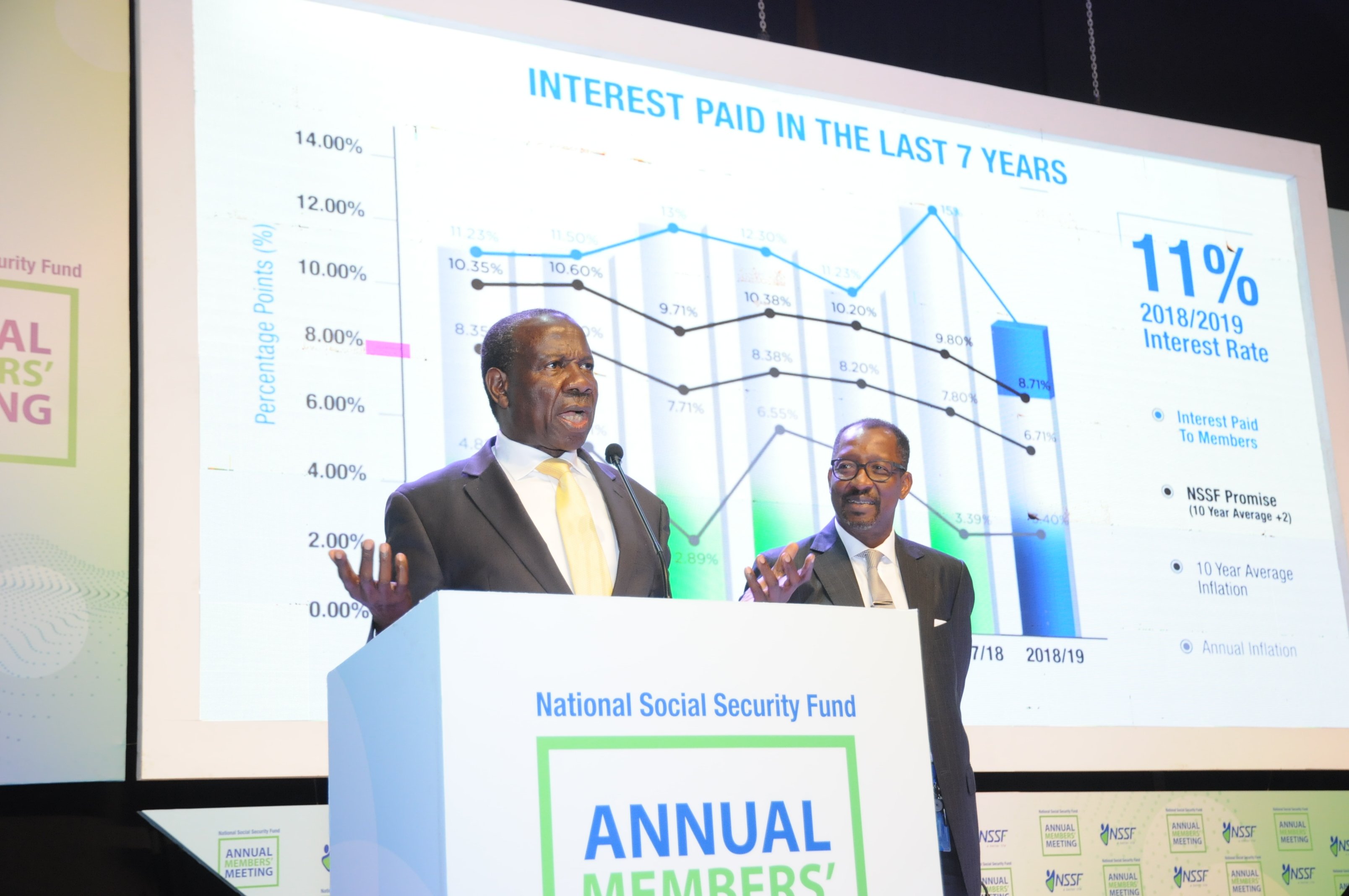 At a recent news conference, NSSF Managing Director, Richard Byarugaba revealed that the members would receive a lower interest rate on account of a drop in its total income.

Last year, NSSF announced an interest payout of 15% on members’ savings for the financial year 2017/2018, the highest interest rate that the pension Fund has ever declared.

It equated to Shs 1.1 trillion to be paid out in interest to members of the Fund and was a 3.7% increment compared to the previous year.

Over the period of six years since 2012, NSSF’s interest has increased by 5%.

In its performance for 2018/19, the Fund’s revenue which includes interest, dividend and rental income increased by over 20 percent to Shs 1.3 trillion.

However, overall income reduced by over Shs 402.8 billion due to a decline in regional equity prices and currencies.

For instance, the Nairobi Stock Exchange lost 14%, the Uganda local share index shade 10% while Tanzania plummeted by over 21%.

Consequently, the share prices closed below the prices registered at end of the previous financial year, which impacted the performance of  our equity portfolio.

Commenting on the drop in the interest rate on Friday, Byarugaba said: “It is because of the equity losses – Shs 400bn of that”.

“In fact, I can now mention to you that if we haven’t got that negative movement on our equity positions, we would have been able to give 15%”.

“Because the Shs 400bn was equivalent to 4 percentage points which we would have been able to pay members. So we would have retained the rate at 15%. It’s not a bad performance, it’s a good performance,” Byarugaba told reporters on the sidelines of the meeting.

He explained that the Fund is a defined benefit scheme and as such, the members near the loss when they come.

In terms of performance, the Fund’s assets under management increased by 13.1 percent from Shs 9.9 trillion to Shs 11.3 trillion at end of June 2019.

This, Byarugaba told members, was mainly driven by increased contributions and interest income.

Contributions increased by 15%, from Shs 1.0 trillion to Shs 1.2 trillion.