Richard Byarugaba, the NSSF Managing Director, has described the proposed amendments in the pension scheme which call for taxation of retirement benefits, as progressive.

Reports in the media regarding the amendments sparked outrage online with many saying it is yet another manifestation of government’s excessive taxation. Others say the taxation of these benefits could reduce the already low numbers of those saving.

What is perhaps the most controversial amendment is Clause 19 which proposes to substitute Section 38 of the current NSSF Act which relates to taxation of benefits.

Uganda’s current tax regime with respect to pensions and retirement benefits is a Tax Tax Exempt (TTE). This means that a member’s contribution is taxed at deduction of payroll, NSSF income is taxed when earned and the members benefits are exempted from tax.

The implication of this is that all member accrued benefits will have been taxed by the time they are paid.

When the NSSF Amendment Bill 2019, becomes law the tax regime will change to an EET (Exempt Exempt Tax). Here, member contributions will not be taxed, and NSSF income earned will not be taxed. However, member benefits will be taxed at the point of withdrawal.

“Should a member attain the age of 60 years their Age benefit will not be taxed. Other benefits that will not attract tax also include the invalidity and survivors benefits,” Byarugaba said on Wednesday.

Byarugaba noted that the Fund welcomes the decision by government to retain NSSF as the Basic National Scheme, entrusted with management of mandatory social security contribution for the entire country.

Other approved principles that underlie the proposed amendments to the Act include expanding social security coverage, enhancing efficiency and effectiveness in investment, providing for introduction of new benefits, improving governance and streamlining appointment of staff to key positions of the Fund.

Byarugaba said that the proposed amendments are progressive and address the concerns of the members and the country at large. 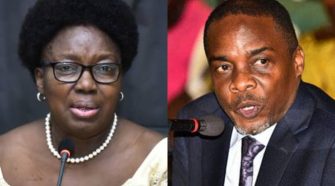