Kenya’s main opposition figure Raila Odinga has come out to challenge the outcome of Thursday’s repeat Presidential election calling it a ‘sham’ that he and his NASA coalition will not recognize.

The four time Presidential candidate lashed out at Kenya’s electoral commission IEBC for failing to produce “a believable voter turnout figure” and later lconcocting the figure in favour of President-elect Uhuru Kenyatta.

On Monday, IEBC declared Uhuru Kenyatta the winner of the election whose turn out was as low as 38%. Kenyatta garnered 7.4 million of the total 7.6 million votes cast, representing 98.2%. Weeks to the repeat election, Odinga had pulled out of the race in protest of failure to implement reforms.

“The Chairman initially announced a figure of 48 percent which translates to 9.4 million but on realizing how preposterous that was, revised it downwards to 6.55 million which translates to 33 percent,” Odinga said at a press conference summoned by NASA leaders on Tuesday.

In his first statement since Kenyatta was declared winner on Monday, Odinga said that the IEBC lacked a common position regarding how the election was conducted and instead “got deadlocked on the figures to assign to President Uhuru Kenyatta, in light of the low voter turnout that all Kenyans and indeed the whole world witnessed”.

If the election outcomes are allowed to stand, Odinga says “it will make a complete mockery of elections and might well be the end of the ballot as a means of instituting government in Kenya”.

“A president who is elected in an election that does not comply with the constitution cannot legitimately and constitutionally exercise authority on behalf of the people.”

“We shall see to it that we conduct a free, fair and credible presidential election as ordered by the Supreme Court,” Odinga stated.

Going forward, Odinga has announced that the opposition has resorted to forming a ‘People’s Assembly’ that will work towards ‘restoring constitutionalism and the legitimacy of the Presidency’. He recently told his supporters to await a major announcement on how to proceed.

The People’s Assembly which Odinga termed as “a broad based forum” will be constituted by elected leaders and the leadership of other sectors of society in particular workers, civil society, religious leaders, women, youth and economic interest groups.

“As part of the People’s Assembly, NASA is forming a Task Force to look into the systemic governance weaknesses that have precipitated the unfolding political crisis,” the opposition leader said.

Odinga listed systemic failure of the electoral systems, the abuse of national security organs, the political architecture and the structure of the Executive and Parliament, and the exclusion in the allocation of public resources as some of the issues that the Task Force will tackle.

“We anticipate that the Task Force recommendations will include constitutional amendments that will be presented to the People’s Assembly for adoption, and thereafter to the County Assemblies for ratification.”

Meanwhile, Odinga has again called on citizens to pour onto the streets and demonstrate as a way of exercising their right to dissent.

“We will continue to assemble, to demonstrate, to picket and to present petition to public authorities as often as we choose.”

He, however, revealed that the opposition is willing to dialogue with Kenyatta Jubilee. “NASA is for dialogue. All political differences are resolved through dialogue,” Odinga said. 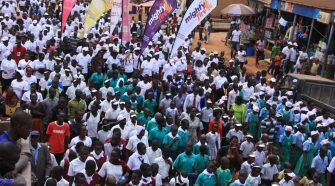