Health officials in Uganda say that much as the spread of Ebola into the Ugandan territory is still contained, gaps like the porous entry points along the entire stretch of the border with DRC pose a serious risk.

This makes the latest outbreak of the deadly haemorrhagic fever, the worst in the country’s history. Of the total cases with recorded sex and age, 57% (907) were female and 30% (475) were children aged less than 18 years.

The World Health Organization (WHO) recently warned that the increasing spread of Ebola in DRC, largely facilitated by the continuous attacks by armed groups, risks spreading the disease to neighboring countries including Uganda.

According to Douglas Lubowa Sebba, the C4D Emergency Officer at UNICEF Uganda, several interventions have been made to ensure the Ebola disease does not spread to Uganda. These interventions include intensified surveillance and screenings of people entering Uganda from the DRC.

However, he said the informal points of entry at the border, coupled with activities like market days which put many people from DRC in contact with Ugandans remain a challenge in the fight against Ebola. Whereas the screenings for Ebola are conducted at the gazetted entry points, some people opt for other convenient passages to sneak into Uganda.

“On the market days, people don’t have the patience to line up. People use the informal crossing routes. There are also other informal routes like the fishing sites where you can’t have channels for people to gather and be screened, ” Lubowa said.

He says government is relying on local leaders to effectively create awareness on the importance of the screenings so that traders can understand the risks involved.

Richard Okwi, a Senior Sociologist at the Ministry of Health told journalists during a training workshop on Thursday that on a daily basis, between 3,500 and 4,000 people are screened. This figure only captures people who enter Uganda through the two main borders at Mpondwe in Kasese and Lamia in Bundibugyo.

He said that on market days, this number rises to about 7,000.

“But because of this screening, there is a tendency of people dodging the areas where there is screening,” Okwi said.

“We had left the West Nile region since it is not a high risk area. But because people are realizing now that there is screening in the Kasese area, they are choosing to use the route of Zombo and Arua,” he added.

According to WHO, Ebola virus disease transmission remains most intense in Katwa, Butembo, Mandima, Mabalako, Musienene, Beni and Kalunguta hotspot health zones, which collectively account for the vast majority (93%) of the 303 cases reported in the last 21 days between April 17 and May 7 2019.

In April, Uganda’s Ministry of Health said government is to support 20 districts along the DR Congo border with a total of Shs 3.2 billion to help them in the fight against the Ebola virus.

But Lubowa says there is still a gap in terms of creating awareness on Ebola prevention, particularly in Kampala which is another high risk area where some of the buses from DRC end. Authorities in Kisoro district alone say that a total of 13 buses pas through the border of DRC entering Uganda every day.

Ahead of the Martyrs’ Day celebrations on June 3 in Namugongo, authorities in Uganda say there will be public health points at Namugongo where screenings will be conducted.

Meanwhile, they cited other challenges such as inadequate funding as hampering the fight against Ebola. Lubowa said that while there was sizeable financial assistance extended to Uganda by donors in the initial 6-month period of the outbreak, the funding has significantly dropped.

“The donors say they will not provide financing until there is a confirmed case in Uganda,” Lubowa told the press. 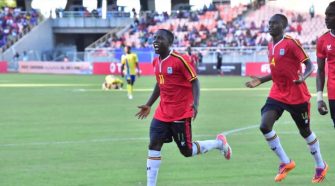