Manchester United have confirmed the appointment of Ole Gunnar Solskjaer as the club’s permanent manager on a three-year deal.

The Norwegian was named interim boss in December when he replaced Jose Mourinho and the club insisted at the time they would conduct a wide and thorough search for their next boss.

However, Solskjaer has won 15 of his 19 games in charge of the club and guided the team through to the quarter-finals of the Champions League after a stunning comeback win against Paris Saint-Germain.

United had been expected to wait until the end of the season before making an announcement but the club confirmed today that the 46-year-old had been given the job on a full-time basis.

“Manchester United announces that current caretaker manager and former striker, Ole Gunnar Solskjær, has been appointed as the club’s full-time manager on a three-year contract,” the English Club wrote on its website on Thursday.

“From the first day I arrived, I felt at home at this special club,’ said Solskjaer. ‘It was an honour to be a Manchester United player, and then to start my coaching career here.The last few months have been a fantastic experience and I want to thank all of the coaches, players and staff for the work we’ve done so far,” he said after his appointment.

“This is the job that I always dreamed of doing and I’m beyond excited to have the chance to lead the club long-term and hopefully deliver the continued success that our amazing fans deserve,” he added.

Solskjaer’s only previous experience in the Premier League was with Cardiff City and he failed to steer the Welsh club from relegation in 2014.

However, the Norwegian’s knowledge of Old Trafford and his popularity with supporters has restored a positivity that was lacking under Mourinho. Solskjaer has restored positivity. 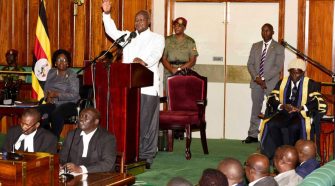 I love trump for his frankness toward Africa – Museveni