President Yoweri Museveni has directed the Prime Minister and the Ministry of Foreign Affairs to explore available options and see whether Ugandans who are stuck in different foreign countries due to COVID-19 related restrictions, can be evacuated back to Uganda.

The travel restrictions (closure of airports and land borders) issued by governments across the world to slow the spread of coronavirus have left hundreds of Ugandans stuck in different countries as uncertainty on when these restrictions could be lifted drags on.

The Ugandan government including the Prime Minister’s Office and Ministry of Health has previously urged its citizens who are affected by these travel restrictions to stay where they are.

They said flying to Uganda would likely expose the country to the disease and that the health care system could be overwhelmed.

Asked on the issue on Tuesday, President Museveni said that in some instances such as China, it was impossible to evacuate people given the strict restrictive guidelines.

He made reference to the events over a month ago when coronavirus had just broken out in China’s Wuhan city, and there were calls for the Ugandan government to evacuate Ugandan students trapped there (Wuhan).

“We couldn’t and we shouldn’t have attempted to get them out because we would have caused problems to their relatives here. That’s why we said ‘You stay where you are, let the problem can settle down’,” Museveni said during his address to the nation.

“At some stage, they said the money they had had gotten finished because they were students, and we sent them some money,” he said.

On the groups of Ugandans currently stuck in foreign countries including UK and U.S, Museveni has directed the Ministry of Foreign Affairs to get in touch with the different groupings to see what plans can be worked out.

“Either we can airlift them and put them under quarantine. The only issue is the expense”.

However, he said there would be a challenge in cases like U.S where individuals are scattered as a result of the internal travel restrictions imposed by the individual U.S States.

“We can’t send a plane to pick everyone in every State. But if it can be done safely, we can airlift them. And they come back and we put them under quarantine and check them”.

He said the Prime Minister will take it up with the Minister of Foreign Affairs.

In the case of China, he said evacuation was difficult because there was total lockdown and people were not allowed to even leave their houses.

“Recently, Americans asked for permission to airlift their people from Uganda. And they asked me to allow some of their people to drive from Arua because here, things are a bit easier. But when you have a situation where people are not allowed to leave their house, because the situation is so bad, what can you do? You only have to wait”. 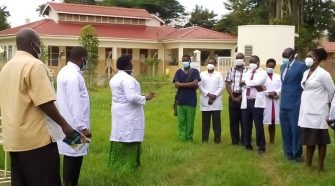