Despite growing appeals by the Ugandan public for drivers of cargo trucks to blocked, branding them the remaining carriers of coronavirus disease into Uganda, President Yoweri Museveni has said blocking cargo would be suicidal for Uganda.

In the past week, all Uganda’s new cases of Covid-19 are truck drivers who crossed into Uganda from Kenya and Tanzania. All the drivers are tested for Covid at the border points and left to proceed with their routes into Uganda. Health teams then track those whose samples test positive and evacuate them to isolation facilities.

However, the danger with this is – the drivers interact with many people along the route who in the end might be infected.

“It’s clear one of the remaining source of infection are the lorry drivers within Uganda but especially between Uganda and the rest of the region. I’m told Ugandans are very angry at them. But the saying goes that anger eclipses wisdom,” Museveni said during his national address on Tuesday.

He explained that cargo is part of Uganda’s planned survival system now that the economy is partly shutdown.

“To interfere with cargo is suicidal. Ugandans have to swallow the anger and employ the wisdom. Stopping cargo is unnecessary. If we stop now, how will our coffee, cotton, tea, milk, cement, steel, sugar, and the others move? If these doesn’t move, why should the farmers continue farming?”

He as well elaborated that it is the same cargo trucks that bring in the raw materials and other imports that the Ugandan economy depends on. This road supply chain benefits not just Uganda but DRC which imports significant goods from Uganda, he added.

Instead, the President urged Ugandans especially the women who often interact with these truck drivers, to stay away from them as a way of preventing the spread of coronavirus.

“It’s simple. These truck people can come, go wherever they are going and we don’t mix with them”.

He said the Ministry of Transport will work to strictly enforce measures that ensure the trucks stop only in designated places.

Museveni says Uganda’s response against Covid-19 is largely successful and that the curve of infection has been very flat, unlike elsewhere around the world.

Beside the likelihood that Uganda has contained the infection, he says the flat curve could also be an indicator that either people are being infected but they are not getting sick or some people are dying from Covid-19 but unknowingly attributing the deaths to other causes.

“Now the question is – within Uganda, we are getting zeros for the last days. But does it mean we’ve defeated the disease within Uganda? I don’t want to rush to that conclusion”.

“The world is trying to develop and antibody test. Once that one comes, it will help us know the one who has been infected but has overcome the disease. For people who died and people didn’t know, our medics are already doing verbal autopsy. If there’s suspicion, they can test those who were in close contact of those who died”.

He cautioned the public against laxity in observing the preventive measures.

Museveni says the next course of action (once the lockdown period is completed) will be determined by studies by health experts, not supposition. 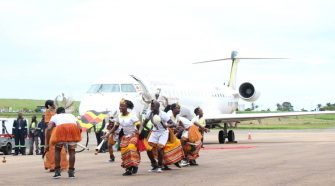