In his first public statement since a fresh diplomatic row emerged between Uganda and Rwanda in the public sphere over a week ago, Rwandan President Paul Kagame has doubled down on allegations regarding harassment of Rwandan nationals by Uganda saying the only way one can be guaranteed safety in Uganda is if they say they are against Rwanda.

A few days ago, the Rwandan Foreign Minister, Richard Sezibera strongly advised Rwandans not to travel to Uganda saying they risked being arrested illegally, tortured and deported.

On Saturday, President Kagame reaffirmed this position saying the Rwandan government can not guarantee safety of Rwandan nationals in case they travel to Uganda.

“We have not stopped Rwandans from going to Uganda but we are telling you – look, we can’t guarantee your security there. We’ve had cases of people being arrested, we have addressed the matter with Uganda but nothing has happened. Just don’t go,” the Rwandan President said.

Kagame was Saturday addressing over 350 leaders during the 16th National Leadership Retreat known as ‘Umwiherero’ held in Gabiro, in Gatsibo District.

“You can only be safe in Uganda if you are against Rwanda, that’s the only way they will welcome you. I have come to accept that we advise Rwandans not to go Uganda. But we don’t stop other people from coming here and we don’t touch them,” Kagame said.

It is the first time Kagame has spoken at length on the ongoing impasse with Uganda. The fresh strife in relations between the two neighboring countries was sparked by the closure of three border points, Katuna, Cyanika and Kagitumba by Rwandan authorities resulting into a customs crisis.

Over Ugandan 100 trucks loaded with cargo spent a week at Katuna after being denied entry to Rwanda. Rwandan authorities said the closure of Katuna border was to allow works on customs infrastructure and advised heavy trucks to use alternative routes of Kagitumba and Mirama hills, but these border points had also been closed.

Related: “Desist from Responding to Rwandas Claims in Media” – Museveni to Ugandan Officials

Kagame said Saturday that the challenge at Gatuna border is temporary and has nothing to do with the issues with Uganda.

“I hope that will be resolved, let’s do whatever is possible to ease traffic flow at the border. There are more serious issues to deal with,” he said.

It is not clear why Kigali did not close the border with Uganda during previous construction works in the Rwanda area bordering Uganda.

Kagame delved into what he said is the bone of contention with the Kampala administration. He said he has sought from Uganda’s President, Yoweri Museveni to understand what Uganda’s concerns against Rwanda are but the Ugandan President has not provided any.

“I have asked my counterpart of Uganda whether there is anything they have against Rwanda and promised I would go back and address it. Whatever it was. I said ‘Rwanda doesn’t want this problem, I don’t want it’. And he could not point out any,” Kagame said.

In explaining the concern regarding the alleged harassment of Rwandan nationals by Uganda, Kagame cited the example of Rene Rutangungira, who has been in military detention in Uganda.

Kagame said he has personally brought the matter concerning Rutangungira to the attention of President Museveni after Rutangungira’s family approached him (Kagame).

Kagame said he learnt that the allegations against Rutangungira were in connection of killings of members of the opposition in Uganda. He told Museveni that the allegations were mere fabrications by elements of Rwanda National Congress (RNC) which the Rwandan government has for long accused of plotting to destabilize Rwanda.

Kagame claims individuals affiliated to RNC who have a leeway to recruit in Uganda command authority in Uganda and have been tipping authorities in Kampala who to arrest under the pretext of being Rwandan spies.

Kagame said Rutangungira is yet to be arraigned in court and that Uganda authorities have since changed the charges against him.

But the charges brought against Rutagungira in Uganda’s General Court Martial include kidnapping Rwandan refugees in Uganda and illegally repatriating them to Rwanda, and a specific case of President Kagame’s former bodyguard, Lt Joel Mutabazi, who sought refuge in Uganda but was abducted and taken back to Rwanda.

In other cases, he said, Rwandan nationals are dumped at the border after being detained with no charge.

He also pointed out the case of renowned Rwandan tycoon Tribert Rujugiro who he said runs businesses in Uganda.

Kagame says in one of the meetings with Museveni, he raised the issue of Rujugiro whom he claims funds groups that seek to destabilise Rwanda.

“Initially, he [Museveni] said he did not know him [Rujugiro],” Kagame said.

However, in response, Museveni said Rwanda should distinguish between business and politics, Kagame said.

Kagame used his address on Saturday to reassure those considered as enemies of Rwanda that no one can bring him or Rwanda to its knees and that Rwandans should not let it happen.

“You can do harm to me – sometime you can succeed. But there is one thing that is impossible to me and to my country. No one anywhere can bring me to my knees. I don’t think our country will ever be brought to its knees”.

In the wake of the closure of the Katuna border to cargo and the subsequent travel advisory discouraging Rwandans to cross to Uganda, some Rwandans used other small routes to sneak into Uganda in pursuit of services and other day-to-day duties. It took Rwandan security to stop Rwandan citizens from accessing Uganda.

On Saturday, Kagame faulted his local government leaders for failing to implement government programs in agriculture and health aimed at making Rwanda self-sustaining.

These failings, he says, have put the country in a situation where its being blackmailed.

“It is a shame we still have people crossing the border to get water on the other side, even where there is a water point on our side within the same distance. I don’t want to blame residents. I blame the leaders, even in places with no water sources,” he said.

Despite their government’s travel advisory, there are many Rwandans living and working in Uganda. They own homes and run businesses in Uganda and none of them has raised security issues or that they are being targeted.

Uganda hosts more than a million refugees including many Rwandans. Uganda’s open door refugee policy has been hailed as the best in the world by the United Nations.

Uganda has denied allegations that the country hosts Rwanda’s enemies and the Minister of Foreign Affairs, Sam Kutesa, responded in a diplomatic note to Kigali. President Yoweri Museveni has advised Ugandan government officials to desist from responding to Kigali’s accusations in the media. 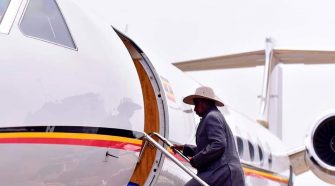 Museveni in S.Africa to Attend SADC Conference on Western Sahara