After guiding the Uganda Cranes to the second consecutive Africa Cup of Nations (AFCON) tournament, Mamelodi Sundowns’ goal keeper and Cranes’ captain, Denis Masinde Onyango has been nominated for the Confederation of Football (CAF) footballer of the year award.

Known for his spectacular saves while on the pitch and the command he offers to the back line, Onyango was in 2017 voted as Best African player of the year based in Africa defeating Keegan Dolly (South Africa), Hlompho Kekana (South Africa), Khama Billiat (Zimbabwe) and TP Mazembe’s Rainford Kalaba (Zambia).

He was in the same awards voted as the Best Goalkeeper in Africa.

Onyango has featured in all the five Cranes 2019 AFCON games played so far but he has not conceded any goal yet. Matter of fact, Uganda Cranes are the only team that is yet to be scored on the continent in the tourney.

‘Mr. Safe Hands’ as he is always referred to by fans will tussle it out with Egyptian and Liverpool’s Mohamed Salah, Alex Uwobi of Nigeria and Arsenal, Naby Keita of Guinea and Liverpool, Riyad Mahrez of Algeria and Manchester City as well as Sadio Mane of Senegal and Liverpool and 29 others for the award.

The Cranes have also been nominated in the men’s national football team of the year award along side other five countries which include Guinea Bisau, Kenya, Madagascar, Zimbabwe and Mauritania.

Last year, Uganda played at the final AFCON tournament after nearly 40 years and Cranes was voted as the best national team of the year by CAF.

The Awards ceremony will be held in Senegal on January 8, 2019. 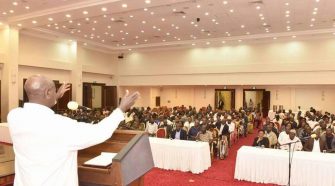