I refer to you as Uncle because you are our own, a friend, a student and part of us Ugandans, i have read many books citing you as one of those that helped in liberating Uganda during those years that I wasn’t existing, I have also heard that in 1986 immediately after the NRM had taken over power, you were installed as the first  head of military intelligence in Uganda and information about your journey also is that you had your studies here first at Ntare School where you were eventually suspended from and you completed your studies without distinction at Old Kampala Secondary School.

Uncle, there is a lot that has been happening ever since you decided to close the borders and also stopped Ugandan trucks from accessing Rwanda in late March, business has been put to standstill, you have barred Rwandans from accessing Uganda again and this isn’t good for neighbors.

At first, your authorities said it was a road maintenance issue, then they said it was some simple issue that was being sorted but later your own officials started alleging that Uganda has arrested many of its officials and to bring out the real reason as to why you decided to close the border, your Information Minister openly addressed the media that side and said your people are being mistreated and arrested whenever they come to Uganda. Oh this was a clear sweet lie because Uganda is occupied by people of Rwandese origin and i have never seen any being mistreated by our authorities because we consider them to be one of us.

Your authorities even barred the young generation from attending classed that they had in the schools on the Ugandan side of the border and that how their love for school was being played around with which is not only a hiccup to their future but also a danger to their way of life because being young and knowing that your President doesn’t want you to cross to the neighboring country is just unfair and bad news.

As a result of your actions, Ugandans now hold a genuine fear of you. This is unhealthy and frustrating. I think that you rethinking your strategies will help bring back the lost relationship between our two countries. It is apparent that you have minimal interactions and few genuine relationships with Uganda authorizes one of these days. If you did, I do not think you would choose to close the borders and also stop your people from coming in here, such as those that  they have stopped from accessing Uganda forcefully and some losing their lives just days back,

I ask you to cease your attempts to divide us with our good people from Rwanda into us versus them because, Uncle, check, Your Ugandan neighbors don’t want to live in an us versus them society. Rather, what we all want as Ugandans and them as Rwandans is to live in a nation that upholds all its residents’ rights to life, movement, liberty, and a life of happiness.

The martyrdom of the Rwandan people afflicts humanity. Each day, the dead join the dead, the wounded join the wounded and destruction joins destruction. Today, Rwanda, a beautiful country whose history is a lesson of greatness for humanity, is in the process of disappearing because of what has been happening one of these days inside and out of the country boarders. Humanity is scared. It wants to help but does not know how to do so, it calls out for help for the Rwandan people but nobody comes kindly because you can’t help from within, but from outside. Our relatives, brothers, sisters and our own wives are now locked and blocked from leaving their country Rwanda to come back here and check on us, ourselves travel to your country uncle but while in fear, we think we may be hammered, we think we may be arrested for being Ugandans who have interest in many good things in Rwanda and sometimes we think there is that bad thing that our country did to your country.

Today or the other day the whole world will know how funny and bad you have acted by making uncalled for decisions as the wounded will die for lack of care and those arrested will disappear because you think they are enemies whose interests are in unseating you from your throne. It s not totally right to remind us about what happened in that very country years ago when many of our own good people lost their lives and left a very good number parentless, helpless and hopeless.

I see a number of Rwandan refugees and citizens of Rwanda in many neighboring countries led by Uganda where they are as their second home, Burundi has many and Congo also has a number of people with Rwandese origin, these people now feel better staying out their own country and everyone clearly understands that many will not return to their country for quite a while and for sure you also know this.

Uncle, I know you have invested a lot in intelligence but seems this intelligence isn’t giving you the right facts on ground, it’s just giving you misleading intelligence leads that are turning you into an enemy of the people and an enemy to your greatest neighbors who brought you up and made sure you were healthy and secure even during those tough times that you were in the struggle to liberate Rwanda.

Just wondering how you dare turn against your own comrades uncle, these innocent souls that were recently shot ohh, I wonder why all that force was used onto them yet they were totally unarmed civilians who had no danger to anyone, they could have been reprimanded and their issues sorted legally other than shooting them dead. They had families like anyone else but now they lay down deep there where there is no more breathing.

Uncle Kagame, the situation seems hopeless, but there is however a simple way to save the Rwandan people: Calm down, Talk to your great neighbor President Museveni, agree to disagree in a very fair manner, treat your citizens and other outsiders fairly, understand that there is a lot in common between our two countries, learn that many of your citizens are now having a dual citizenship one here in Uganda and the other there.

Uncle please try to remember that these two countries have had many inter-marriages, we have Rwandan wives here and your own have Uganda women which is just super good but some of us have become bachelors again because our wives are stuck that side, they are not being allowed to come back here, the Rwandan borders are not open to them but only open to us and its very annoying. 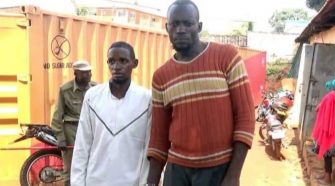