Police in Rukungiri district have arrested a man on suspicion that he was involved in the shooting and killing of a Sergeant attached to Uganda Wildlife Authority (UWA).

Sergeant Asasira Philemon was shot and killed while on his duties in Queen Elizabeth national park.

The suspect who is currently in detention has been identified as George Sabiti, 62, a resident of  Rwesigiro cell, Kikarara parish, Bwambara sub-county in Rukungiri district.

Police say Sabiti, a suspected poacher was arrested by UWA officers attached to UWA headquarters Katunguru, Rubirizi district after one of their staff Sgt Asasira Philemon was shot and injured in the stomach during a fracas that ensued while attempting to to arrest him.

He is said to have been in possession of wildlife species.

According to Elly Matte, the Police spokesperson for Kigezi Region, it is alleged that on Friday at around 8pm, three UWA personnel who were conducting their usual operations in the park, received intelligence information of sale of Ivory by someone.

In an attempt to establish the facts of this information, they disguised themselves as interested buyers and were led to the point the ivory was stashed.

It is from there that they decided to arrest Sabiti, the owner of the ivory. However, in the process, they realized that there were other of Sabiti’s colleagues who had been hiding.

In an effort to disperse them, the UWA staff who was armed with a pistol started shooting in the air.

“Incidentally, the Sgt who was struggling with the suspect, was shot. He was rushed to Bikurungu health centre and later referred to Nyakibale hospital where was pronounced dead on arrival,” Matte said in a statement.

Police visited the scene and recovered two cartridges of a pistol and a small piece of ivory along with other wooden spices in a 50kg polythene bag.

Matte said Police is conducting investigations to establish the source of the bullet that killed Asasira as well as who discharged it.

Matte has warned those involved in acts of poaching that such lawlessness will not be accepted. He said those found culpable in Friday’s incident “must be dealt with accordingly”.

UWA said it was mourning Asasira who “has paid the ultimate price of conserving our wildlife resources”.

“Investigations are underway and details will be given once all facts have been established. May his soul rest in peace,” UWA wrote on Twitter on Saturday. 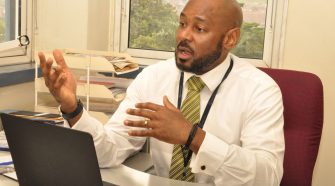