Uganda is one of the most ethnically diverse country in the world, most religious with numerous denominations (traditional and foreign) and currently highly polarized politically and divided economically.

This has got some people worried of the future, drawing examples from the confused brothers and sisters from South Africa who are killing their fellow Africans.

Could this numerous divisions boil out into inhumane acts we are seeing in South Africa? Could the “whispers” in social media, the anger expressed by many for several reasons, take us to the level of South Africa?

Try checking on the comments section of posts or hear what people talk about in some circles, it’s scary. Many believe we have a strong government and the law still works. That is true for the moment.

Indeed, the current NRM government won’t allow this nonsense we see in South Africa to happen in Uganda today.
However, the questions that must ring in our minds right now should be; for how long will we depend on this “strong government” to keep the rogue ones at check, if they are right now?

Is it sustainable to “contain” rather than “address” the root causes of this anger?

Have we attempted as a country to address the issues that led to (and the results of); the UPA war in Teso? LRA rebel massacres? Karimojong rustling In Teso and the North continuously associated with government help? The recent Ruwenzori massacre? Those unexplained and unresolved serial killings? Have our people healed enough; if at all something has been done? If not, what are we waiting for to heal them?

Indeed, the Ugandan situation could get out of hand too due to the deep tribal and regional divisions, economic, cultural and political differences. Religious differences alone can cause us big trouble as some still think and believe that heaven is meant for only them and not others. Just a mess!

But there is time to heal the wounded. Let’s not aim to contain them, heal them; provide equal opportunities and service delivery; show some love to the citizens (respect, not teargas, Kiboko and torture). Avoid the tendency to favor any side against the other; let people speak up and heal. Compensate the afflicted; avoid the practice of or stop those grabbing people’s land and property. Arrest and prosecute murderers.

Let there be a semblance of Justice and a true concern of what afflicts others. Allow room for political participation without persecution.

Human beings can’t be herded like goats. They will always break loose and challenge any authority. These acts of kindness may turn monsters in to soft people. Resorting to cabals and mafias, probably as a security measure by some, will only aggravate hidden anger. Instead of worrying, let’s get to work.

For God and My Country!

The writer is the Head of Alumni Programs at TeachForUganda 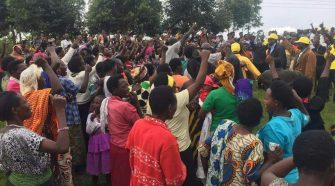