Uganda Revenue Authority (URA) under the Taxpayers Appreciation Month has built synergy with Ministries, Departments and Agencies, and this year the theme was ‘Stronger together’.

The theme recognises the valued partnership between URA, the taxpayer and the various government agencies. The appreciation month which has come to an end was intended to give room for accountability, encourage voluntary compliance, transparency and also create awareness.

Almost 95% of URA’s revenue collection is normal flow, an indicator of high compliance levels hence eliminating the need to depend on enforced revenue collection. Which is a good indicator.
To develop a tax paying culture in Uganda, we must show what the revenue does for Ugandans to appreciate.

Government must be able to be accountable and show gratitude to the taxpayer. One of our most desired outcome of this initiative as government is to make sure that we promote voluntary compliance as well as promote awareness of the various government programs that are in place, show Ugandans how they can harness these benefits and also interact with the public to know how they can contribute to policy formulation.

Every year, the Taxman is able to witness a shift in voluntary compliance as more taxpayers are voluntarily paying their taxes. This year, during the Taxpayers Appreciation gala at Kololo, URA recognised exemplary taxpayers and through a robust vetting process, the outstanding taxpayers and the most compliant were rewarded under three categories: Commissioner General’s Award, the Vantage Award, and the Excel Award. The basis lies on a number of parameters including revenue growth, meeting various compliance criteria and making a considerable tax contribution.

The Commissioner General’s award is given to the stakeholders or partners who have been able to collaborate with URA in revenue mobilisation. These partnerships stretch from participation in tax sensitization drives to the direct involvement in URA operations. This is broken down to the government agency, the media agency and a donor/professional partner.

This year, we recognised The Judiciary and Ministry of Educations as Strategic MDAs, UCIFA and UFFA as the strategic professional bodies. Under the Media category, Soft Power communications was the runner up while Salt Media won the award.

The Vantage Award recognises eight compliant taxpayers countrywide by looking at the four country regions; the Central, Western, Northern and Eastern. This is regional, both Individual and Non-Individual because in every region, there are compliant taxpayers. They are termed as the Taxation’s Rising Star’ under the small taxpayers and medium taxpayers.

The persons who have received this award have exhibited a high degree of compliance in ensuring timely filing of returns, payment of tax, consistent revenue growth, provided employment to many Ugandans and are responsive to URA initiatives.

This year, there were four candidates in the Individual category and these include: The Eastern region candidates Mr. John Patrick Mwesige the first runner up and the Winner Mr. Tibalira Martin. From the Western Region, the runner up was Mr. Sulait Musinguzi and the Winner Mr. Alikanjero Kushemererwa. The Central region runner up was Mr. Charles Lubega and the winner Mr. Virani Amin. Representing from the Northern Region are runner up Mr. Godfrey Kizito and the winner Mr. Oloya Willy.

Lastly, the Excel award is given to the taxpayer that has contributed tremendously towards the government coffers during the ending financial year. The winner must have registered outstanding growth in revenue contribution and also been able to employ a big number of Ugandans hence contributing to the development of our economy. This year, the Runner up in this category was Nile Energy and the Winner was Crown Beverages Limited.

During the Taxpayers Appreciation Gala, the Ag. Commissioner General mentioned that not only did we recognise the exemplary large taxpayers, however, during the tax payer’s appreciation month, various activities were carried out and in these, the small taxpayer was not forgotten. Tax payer visits were carried out in nine districts comprising Jinja, Mbale, Gulu, Arua, Hoima, Fort portal, Mbarara, Kabale and Kampala targeting the 5 best taxpayers in each district. In Jinja URA visited World Education Inc, in Mbale we visited Sebei College Tegeres, in Gulu we visited the Trustee of Gulu Archdiocese, in Arua we visited Golden Courts, in Hoima we visited Murchison River Lodge, in Fort portal Hofokam ltd, in Mbarara Amos Diaries ltd, in Kabale Agaba Services Ltd and in Kampala Seroma Christian High School was visited. On top of that 80 most compliant taxpayers in each of the mentioned districts were met for a luncheon.

Whereas it is the duty of government (through URA) to collect taxes, this responsibility gives government an obligation to account for its activities and show the results achieved in a transparent manner. The taxpayers should know how the money collected is used and indeed they have a right to demand for services from government. This is a key element of Governance, Accountability and Service Delivery to the public. Government has strived to ensure that social sectors directly benefit the poor by prioritizing the sectors of agriculture, infrastructure, energy, education and health through improved services, increased funding and subsidizing of the services offered by those sectors.

The Taxpayers Appreciation month was a success and we appreciate everyone who took time to participate in the activities. We encourage Ugandans to continue being compliant as well as continue seeking out answers to the question of accountability as the Taxman puts in place initiatives to expand the Tax base.

The writer is the Public and Corporate Affairs Manager at Uganda Revenue Authority (URA). 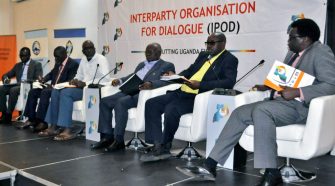