Freedom of expression is anchored in several international and regional instruments. Article 9 of the African charter on Human and people’s rights of 1981 lucidly provides that every individual shall have the right to receive information and the right to express and disseminate his opinions within the law. A similar provision is contained in article 10 of the European convention for the protection of human rights and fundamental freedoms and article 13 of the American convention on human rights.

In Uganda, the framers of the 1995 constitution also recognized this basic freedom in Article 29(1) (a) of the Constitution of Uganda, which provides that every person shall have a right to freedom of speech and expression which shall include the freedom of the press and other media.

However, unlike rights such as the right to fair hearing, the right to an order of habeas corpus, freedom from slavery or servitude and freedom from torture, cruel, inhuman or degrading treatment or punishment, which Article 44 of the Constitution of Uganda distinguished as absolute and non-derogable, all other rights and freedoms in Uganda are subject to many legal limitations.

The constitution of Uganda, just as is the case in several other countries, subjects all the other rights, including freedom of expression and the right of the media to a number limitations, including the obligation to respect other laws.

In the same vein, Article 79 of the constitution of Uganda goes on to empower Parliament to make laws on any matter in order to promote peace, order, development and good governance of Uganda.

In exercising its regulatory mandate, UCC grants licenses to all broadcasters in Uganda, and section 31 of the Uganda Communications Act specifically provides that a person shall not broadcast any program unless the broadcast or program complies with schedule 4 of the same Act.

Schedule 4 of the Act contains the minimum broadcasting standards. Schedule 4(a) provides that a broadcaster or video operator shall ensure that any program which is broadcast is not contrary to public morality, does not promote the culture of violence or ethnical prejudice among the public, especially the children and the youth, in case of a news broadcast, is free from distortion of facts, is not likely to create public insecurity or violence and is in compliance with the existing laws.

Schedule 4 (b) & (d) provides that a broadcaster shall ensure that programs that are broadcast are balanced to ensure harmony, and where the program is in respect to a contender for a public office, that each contender is given equal opportunity on such program.

The minimum broadcasting standards are the statutory rules which every broadcaster is supposed to adhere to in all his or her programs at all times.

The standards are meant to guide broadcasters and their employees, to know which content to include or exclude in their programs. Adherence to the standards is not a form of censorship or gagging as it is often said. Standards are the rules that every professional journalist is expected to consider in all their journalistic works.

However, Just like all human beings, journalists sometimes err and go against the professional norms of good journalism and that is why the Parliament of Uganda made the setting of standards, monitoring and enforcing compliance with the law, one of the key functions of UCC under section 5(1)(x) of the Uganda Communications Act.

In exercise of its mandate, UCC often engages media houses and guides them on areas where they are found to fall short of the set standards. UCC is basically an umpire in the sector.

The law also empowers UCC to receive, investigate and arbitrate complaints regarding the provision of communication services in Uganda. In this regard, UCC receives complaints from members of the public and other stakeholders regarding the broadcast content in Uganda.

UCC may also, on its own, investigate any matters that is considered relevant to the enjoyment of communication services in Uganda.

In exercise of its mandate, UCC often engages media players about the need to adhere to standards. When UCC intervenes in matters regarding content, this does not however amount to gagging the media. Ensuring that journalists and broadcasters comply with the laws of Uganda and the set standards is UCC statutory mandate.

What is however baffling is that every time UCC takes action against media houses for breaching the standards, a section of the public often lashes at UCC and accuses the institution and the officers of the commission of all sorts of things. Some often argue that UCC’s actions are an affront to media freedom.

Whilst UCC welcomes feedback from stakeholders, we note that the anger meted against UCC is most times, with all due respect, borne out of ignorance of the law. Some people assume that freedom of expression is an absolute right that the public and journalists are free to enjoy without any need to heed other laws.

UCC does not certainly have mandate over ordinary citizen’s enjoyment of freedom of expression outside of the regulated platforms. However, for broadcast content, Parliament deemed it proper, for purposes of promoting harmony in society, to give UCC mandate to monitor and set standards for all broadcasters. These standards include a requirement to ensure that news programs are presented in a balanced, objective and unbiased manner, without giving any specific individuals or groups undue prominence. The media is supposed to promote harmony in society and should never be used as a divisive weapon in society to promote anarchical messages.

Contrary to the expected norms, on the 29th of April 2019, UCC noted with concern that a number of broadcasters dedicated a lot of their news time to covering events surrounding the interaction between Hon.Kyagulanyi Sentamu and the Uganda Police. Whereas broadcasters have a general duty to inform the public of the events happening in society, some broadcasters turned their radio and television programs into platforms for biased political activism. For some televisions, the news stories were presented in form of a documentary, with several graphical images of the unpleasant exchanges between the supporters of Hon. Kyagulanyi and the Police.

This kind of journalism had the potential to undermine public security and to negatively dent the hard-earned reputation of Uganda as a democratically peaceful society. The comments made in those programs were inimical social order and were likely to incite the public to engage in violence and compromise the security of our country.

Alarmist and sensational broadcasting, if left unchecked, could potentially plunge our dear country into serious irreversible problems. Many societies have innocently suffered the effects of violence as a result of campaigns orchestrated through the media. We all remember how the media in Rwanda flared up the Genocide in 1994. I believe we are not too young not have witnessed how the media contributed to the fires and cuttings that happened in Kenya in 2007 during the post-election violence.

It is therefore important for the media and the public to understand that UCC’s actions in regulating the media in Uganda are guided by law for the good of the country and not short-term populism. These interventions are measured and are demonstrably justifiable in a free and democratic society, for purposes of preserving the peace, stability and tranquility in our motherland Uganda.

As we commemorate the world press freedom day, all players in the media industry are urged to work towards building responsible journalism that can deliver Uganda to the much needed socio-economic prosperity.

The writer is the Head Legal and Compliance at UCC 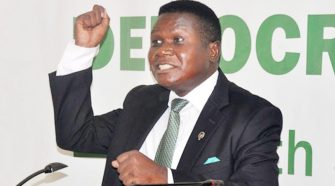