In military training, the most appreciated administratively is the most hated by trainees. This is a deception trainees take long to understand by given opportunity to raise their fears, instead of praising their tormentor they cry foul for his being inhuman.

One would think that Rwanda with a highly proclaimed military experience, propaganda, deception, malice, subversive tendencies marred with hypocritic culture, the norm of crying foul to a tormentor is an art they must must have been acquainted with.

To my dismay, Rwanda after exposing itself like a monkey trying to climb higher to hide its nakedness, they have continued to expose how inept and amateurish they are by deceptively denying that despite being blood suckers, they hate dead bodies.

Brig. Abel Kandiho’s shadow was recently at Rwanda’s disposal served to its social media and Propaganda clients of Rwanda’s deceptive smear campaigners supposedly to expose or misrepresent him as an incompetent Military officer doing his job in a shabby way.

But for a second, let’s reflect on this.

Lets compare the Treatment of Ms. Voctorie Ingabire or Diane Rwigara Political Prisoners whose lives were shuttered and only left them with the inherent God given breath Yet they are just women not considering Deogratius and others versus the manner with which Maj Sankara Callixte a Terrorist Arrested for war Crimes and attempts to overthrow a Goverment was presented to Court to answer treason charges? The two scenarios don’t really make sense.

Like i stated in my opening, For Rwanda to take up arms towards attacking the person of Brig. Abel Kandiho is a sign of feeling the penetration and so deep.

After closing its boarders, a number of Rwanda communicators each issued contradictory and sickening statement as to why they had closed the boarder but notable among the many were allegations that Uganda was arresting and detaining innocent Rwandans. But funny enough they couldn’t explain why the arrested soldiers are officers of the Rwanda Defense Forces or affiliated to it and why they they are deployed in and on which mission are they fulfilling in Uganda?.

What perplexes me is why Rwanda thinks that it can play its dirty filthy games inside other sovereign states and it moves unquestioned?

Last week an Ambassador who acted a very undiplomatic manner by the name of Olivier Nduhungire and the National news paper took it twitter to claim that the terrorist (Maj Callaxte Sankara) who they produced to the court Martial with an equivalent of a best man not even with handcuffs on him already assigned a lawyer, through theatrical presentation that he had confessed that during their course of business they had attempted to meet Uganda’s CMI boss who they didn’t meet anyway but Rwanda played it as if they had discovered who killed President Paul Kagame’s mother.

Why i get comfortable and relaxed very confident that Uganda’s security grip is firmly held, is actually based on the continued rants by the Rwanda establishment that Brig. Abel Kandiho is breaking Rwanda crafty blood sucking works beyond its borders. Needless to mention about the recent killings of a Rwandan and a Ugandan in Uganda by Rwanda’s army.

Rwanda for the 3 years has been forcefully cautioning Rwandans from willingly entering Uganda. However the million dollar question that Rwanda should ask itself and possibly humble itself is why even after strongly insisting that its citizens don’t go to fire, why do they prefer entering hell as opposed to staying in the self claimed paradise?

The Baganda have a saying that “Olaba embwa egoba wakiwempe nga ow’eddiba osigala oyimiride?” Literally meaning “That if you see a dog chasing someone with a papyrus mat, the one with an animals skin you can remain standing” Rwanda’s false propaganda about its improved social services and economy has reached where it can’t hold it anymore. If nationals are running to seek refuge elsewhere it means the bubble is always blown.

It is now evident that Brig. Abel Kandiho is at the helm of his job, it is without doubt that he is the right man for the job. Without a question it is enough to prove his office needs to be empowered more than before in order to protect the sovereignty of Uganda.

If there is any satisfied Ugandan about the job of Uganda’s military intelligence being held to task, it’s me. I am more than confident that now than before in modern times like it in the past, Uganda is still in the right hands of leadership, command and control.

The writer is a Deputy Resident City Commissioner for Kampala – Nakawa. 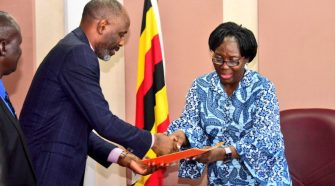 Kadaga: We Must Rethink Zoning of Sugarcane Growing and Production