A lot is being said especially when certain groups of people head to Kyankwanzi for a retreat, I was one of those people who always thought that its only merry making for the NRM that happens at the leadership institute but for sure you cannot understand the Kyankwanzi setting if you have never got time to read about its history and why it was being put in place.

Just to educate those who are just like the way I was understanding Kyankwanzi in a very different perspective, Kyankwanzi itself is a district but it has long been known to the public as the location of the National Leadership Institute (NALI), a government institute, established in the country because of the history of the Bush War by the NRA now NRM to train national leaders in the public service, military, government security organs and willing members of the populace who wish well for their country.

Because political education was the pillar of the 1981 to 1986 liberation struggle. NALI has all along provided ideological direction to many Ugandans in order to enable them learn more about their history, learn leadership skills and also be skilled in defensive basic military training.

NALI aside, formal political education was started in 1985 in Mugusu Kabarole to mobilize Ugandans and enlight them about the mission and objectives of the liberation war, and to give them harmonized perceptions about what to do as concerned citizens of this beautiful country Uganda.

The main vision for starting up this institute was for it to be a national and international center of excellence that develops leaders who are knowledgeable, visionary and are fully committed to the economic transformation of Uganda their and the Mission for its establishment was to facilitate the development of the qualitative leaders who can stimulate and drive Uganda`s rapid economic transformation.

Now back to the main issue, I have heard several Ugandans especially those from the opposition lamenting and showing their discontent at all times when members from the ruling party head to Kyankwanzi, as stated above, there is a lot that is being taught at the institute and for sure the members of parliament from the ruling party and the independent leaning members had not convened together for a common purpose ever since they were elected into their offices and now is the time that they thought of coming together as a block to learn as they also audit themselves for the past three years in leadership.

With due respect, I should thank whoever thought of organizing this retreat because its in such retreats that government can get to know of the different services that local people need since every member of Parliament is given an opportunity to express themselves and point out the real issues that the party has to concentrate on so the local people can support it while also gaining from the developments made.

For the past days while I was at the retreat, I tried so much to analyze the different programs that were happening especially the networking sessions and the lectures, I saw it was very nice being at NALI because the different guests that are brought at the institute to lecture are very intelligent people who have knowledge about different issues ranging from the economy, Politics and the general issues of concern for the local people.

In his speech as he was officially opening up the retreat, President Museveni also the National Chairman of the party emphasized on a number of issues that NRM has really given attention especially poverty, people below the poverty line in 1986 were above 56% and todate poverty line lies at 21.4% and this is determined by services like Education, Health, clean water which are available to the people.

H.E also emphasized that as a country, we need a more investor friendly atmosphere which is free of delays and corruption of public officials and for sure this can enable us get very many investors investing in the different sectors supposing there is ease in all the processes required for them to start up their businesses, factories etc which can in turn employ some of our idle youth thus decreasing on the level of unemployment in the youth.

The president also lectured the members of parliament that since the NRM has already addressed the other bottlenecks such as ideological disorientation, and market integration, the country is now able to move decisively on building an integrated and self sustaining economy that is independent and this is very possible as long as our members of parliament give it attention after the retreat.

Infact there is a lot more that I think will be discussed in this retreat and us as patriotic Ugandans are just waiting for the resolutions that will be made from the holy town Kyankwanzi.

Many Ugandans and a few media houses that take hearsay as their source of information have already started publishing Fake news and also putting issues that have not been yet discussed at the institute in the public domain for discussion.

I don’t just get the reason why there is such a rush yet all the resolutions will be published. I understand there are some sweet issues that many Ugandans are waiting for from NALI but God willing they might come out as they are expected, whether members want the President to come back as a sole candidate, whether they have other things to amend, it’s up to them as the NRM caucus to decide and us as voters will appreciate all the outcomes of the retreat so we ready ourselves for the next move.

The writer works with the Uganda Media Centre 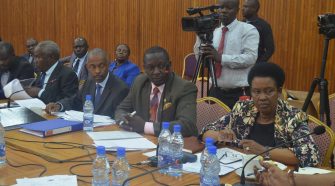