There has been an ongoing debate about the situation of journalists in Uganda. Top on the list of the discussion has been issues of poor pay, exploitation and intimidation that have in turn threatened the true meaning of journalism.

The worst affected people are the field reporters who do a lot of the donkey work, risk at the front line to get good stories and yet walk home with peanuts, unable to sustain their lives.

With some newsrooms paying as little as Shs 5,000 for a news story, the struggle to file more than one story has overshadowed the basic tenets of journalism. It has taken away the basics that a news story must meet. Due to editorial pressure, frontline journalists are more concerned about meeting their deadline rather than the quality of the stories submitted to Editors for publication. There is more focus on quantity than quality.

But journalists have been urged to wake up and fight for their freedoms and stop pretending with a majority entangled in a survival for the fittest sort of situation, characterized by low pay, work pressure, intimidation and sexual harassment by Superiors.

This year’s International Press Freedom Day is themed ‘Journalism without fear or favour”. And as has been the norm, stakeholders will hold events to debate journalism in Uganda and what must be done.

However, the challenge with such events has always been more talk with less meaningful impact. Powerful speakers are lined up to make grandiose statements but these hold no water if Managers, Editors, and proprietors of news organizations are left out of the conversation

For instance, to discuss a befitting wage and advocate for a conducive work environment for all journalists in the country, a concerted effort by all players in the field is needed. This must go beyond panel discussions, to lobbying and engaging entities like National Association of Broadcasters (NAB).

Short of that, the impression created through staged events to be seen as working for a common good of journalists in the country will drag the profession.

National Union of Journalists of Uganda (NIJU), a body of journalism established by the act of Parliament that died on its arrival. The Uganda Journalists Association (UJA) has perennially been consumed in internal fights that have divided practicing journalists than unite them.

Uganda lacks a professional body tasked with issuance of minimum guidelines for entry and exit in the profession which has resulted into the mushrooming number of quacks.

In pursuit of their passion, a few journalists have upheld the game and remained authentic by thinking outside the box and reinvented themselves.

The game changer for journalists seeking to better themselves will be to find a niche. You need to find a news beat, and expand your knowledge on that particular field to a point where you become a reference point. By doing so, you have full control over your work and you cease being seen as a Jack of all trades.

That said, you will need additional marketable skills say in photography, graphic designing and video editing to stand out in the crowd.

The other key attribute is value addition. Any journalist must attach cost value to their work with close look on the time spent and expenses incurred in offsetting the production including airtime, data, food and on ground travel.

Newsrooms continue to be clogged everyday with people who are willing to work for less or no pay. All that seems to matter is a byline, face on the screen and voice on air but that’s not good enough.

The writer is an independent investigative journalist, special features TV News producer, lifestyle and travel photographer. He’s a blogger and award-winning disability rights activist who has been covering a number of issues around health and disability including the situation of persons with albinism through Pats Journal – Ultimate albinism Voice Magazine. 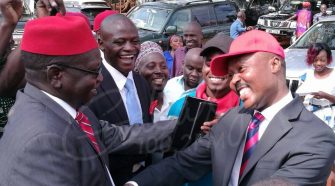 Muntu Concedes to Amuriat, Cautions Him of Challenging Task