As we approach 2018/2019 financial year and the statecraft color that comes around with it – the State of the Nation address and reading of the national budget; the dressing room rehearsals are taking shape. For the first time, Ugandans are debating the revenue side of the budget. For a number of years, debate on the public budget through the circle of consultations in districts, civil society boardrooms, government and parliamentary hallways; most talk and thinking have been about what to spend on, where to spend, why and how to spend on things! That we are now talking and circling on sources of public revenue is a good thing. I hope our buzzing talk on a number of mainstream, social, and get-together platforms – finds space into ambers of public policy.

First, the recent ‘thinking out of the box’ WhatsApp tax, the proposed 15% tax on money transfers, the directive to Banks to lay open citizen’s bank accounts for purposes of taxation have really got me thinking about our Country’s tax code. It’s logic of ages that a country’s tax code can break or boost its economy.

These hasty, non consultative and policy by slogan tax proposals are a response to an open secret – that the economy has been hurting since 2016 and the 6.7% GDP rebound that Deputy Governor, Bank of Uganda Dr.Louis Kasekende recently mentioned at a Uganda Securities Exchange event is not a concrete story and is not felt in people’s pockets. Kasekende knows that Uganda has all the rights to brag about is macro-economic stability and not micro-economic stability. The wellness of the economy should in fact be more at the core measured on number of meaningful jobs it creates, the purchasing power of citizenry – and the health of current account.

Since independence, Uganda has seldom operated a current account surplus. According to open source datasets from Central Intelligence Agency, as of January 2018, Uganda’s current account deficit was at -$1.476 billion. Precisely, we continue to import more goods and services and export less goods and services. This speaks to the state of our strategic and productive capacity as a country – and even for the talk about spending and spending – are we are spending on the right skillsets (person bytes) and known productive sectors of the economy like industry, research and agriculture? More evidence points to more spends’ on re-current expenditure and overadminstration.

Secondly, Internet (data) in Uganda is already taxed – to therefore tax use of WhatsApp, Facebook, and Twitter etc. is double taxation. Even then, taxing information platforms which means effectively constraining free flow of information comes with governance implications. To use tax to restrict debate and flow of ideas even when one disagrees with those ideas is an onslaught on democracy. Make no mistake; economies that thrive are those that are open- that allow imagination and unfettered exchange of ideas, experimentation and execution. People have amazing capacity to discern helpful information and non-helpful information. Local content /innovation promotion is not achieved through retrogressive taxation of Internet platforms but rather strengthening of local capacity through delivery of tax rebates and venture financing to ICT developers etc.

Harnessed properly, information flow through Internet is also critical to law enforcement, national security and accentuating of entrepreneurship. In fact, in Buwate, Kira, Wakiso , the community has a vigilante WhatsApp group with police personnel operating in the area as members. Security updates on this platform has been helpful for the community and police to reduce crime in the area. Recently, a Watsapp Group named “ Concerned Citizens’ launched ‘Fortune500’ savings and investments’ group. Physically unknown to each other, members are people who have been linked by WhatsApp and are now working together to build various tax paying corporations in Uganda.

Instead, Internet taxes should be removed to help Uganda achieve universal coverage of Internet and thus allow innovations and growth of businesses. For emphasis, in turn, government would tax income and profit from such business. Why then pursue a regressive tax regime to kill progressive dreams? Point is, taxing WhatsApp, Facebook etc. is regressive, anti development and undemocratic tax. Our policy makers and agencies must understand that the collection of tax not only requires substantial coercive power, but also more importantly requires a state to be legitimate since the vast majority of tax is collected when there is a high level of voluntary compliance.

Thirdly (Sadly), the Uganda Revenue Authority (URA) directive to have banks expose private bank account details of its clients is not only an attempt at blatant invasion of privacy – but also ant-logic! It is common sense that the soul of any banking system is TRUST. Without trust, there are no banks.

Implementation of such a directive will ensure that the country retreats into informal economy. With Uganda’s tax to GDP ratio at less that 15% (This percentage is very low compared to other East African Community and Sub-Saharan African countries which are at 20% of GDP on average), one would imagine that URA and other government agencies would be pursuing policies and incentives that would drive citizenry into formalized way of life in order to be able assess and collect more tax revenue.

Edmund Burke remarked; ‘Revenue is the chief preoccupation of the state. Nay more it is the state’ (quoted in O’Brien (2001, p. 25). Taxation is inherently political. In the early 20th century, Joseph Schumpeter once wrote: ‘Taxes not only helped create the state; they helped form it. Schumpeter also famously observed: ‘The fiscal history of a people is above all an essential part of its general history’ (Schumpeter, 1918, p. 1954).

Whereas I agree with Burke and Schumpeter that largely the process of tax collection is one of the most powerful lenses in political economy to assess the distribution of power and the legitimacy of the state and of powerful interest groups in civil society, it is important to note that sustainability of taxation enterprise relies on fairness, inclusiveness, and justness of taxation regime. It is also important to note that the ambition of increasing domestic tax revenue in order to provide public goods, develop infrastructures needed to speed up national development is met with reality that development actually happens and that there is no leakage of tax money through corruption.

When people feel their taxes are put to good use, voluntary compliance in payment of taxes increases. A tax code that that sucks blood and freedom out of the economy/country is regressive and counter productive. As we embark on the journey of balancing the budget as Country, we are required to act judiciously and build a progressive tax code where everyone pays a fair share, a tax code that will grow the economy for the many, expand social services, boost national security, inspire innovation – and political and social economic freedoms. May the force of God be with you. 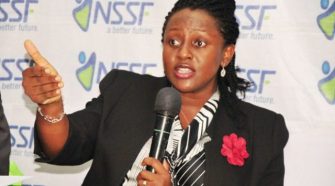 NSSF Should Concern Themselves With Providing Social Security to Its Members: Geraldine Ssali on Covid-19 Relief