Findings from an eight month biometric verification exercise by government of Uganda, the UN Refugee Agency and World Food Program (WFP) show that there was a shortfall of over 350,000 individuals from the 1.44 million refugees quoted by government earlier this year.

The Minister for Relief, Disaster Preparedness and Refugees, Hillary Onek revealed on Thursday that the number of refugees captured at the end of the verification stood at 1,092,213 from the 1,444,856 stated in March this year. This represents 76% of the target (1,444,856)

Uganda’s total refugee population including the 62,139 new arrivals from DRC and South Sudan registered since March this year, stands at 1,154,352, as of end of October.

A comprehensive biometric verification was prompted by media reports in February this year alleging that officials in the Office of the Prime Minister which is mandated to manage refugee operations, were involved in fraud including inflation of the refugee figures. The same allegations accused OPM officials of mismanaging resources including food supplies meant for refugees.

It is against this background that Prime Minister Dr Ruhakana Rugunda directed for an exercise to establish the actual number of refugees, using a biometric system.

In explaining the inconsistencies in figures of refugees, Minister Onek said that 17% of the 352,643 individuals (reduction) were found to be inactive and closed for reasons including; whereabouts unknown by family members, reported to have returned to their countries of origin, registered more than once, dead, found to have been Ugandan nationals.

At least 1,489 individuals were found to have been Ugandan nationals disguising as refugees to benefit from relief aid. The whereabouts of 158,533 individuals were unknown to their relatives, 3,931 were reported dead and 34,174 said to have returned to their countries.

“The total population reduction is 24% of which 17% can be explained on the above reasons, implying that the remaining 7% can not be explained,” Onek said while releasing interim findings contained in a joint statement by government, UNHCR and WFP.

In Imvepi refugee settlement in Arua district, for example, out of the population initially reported, only 43% was found.

The Minister however added that the reduction is not dissimilar to the decreases registered in other refugee hosting countries upon such verification exercises.

“Information received from South Sudan indicates that about 80,000 persons may have returned [to South Sudan from Uganda] over the last several months. The difference, although difficult to confirm at this stage may be found in the numbers of refugees whose whereabouts are unknown”.

He also said that another explanation could be the urban refugees who were hesitant to participate in the refugee verification exercise since they don’t receive relief. There were 55,812 refugees found be to resident in urban areas, according to the report.

Beyond these likely factors, the interim report indicates that 40% of the unaccounted for refugees were children aged between 3 and 12 years who could have been registered repeatedly by their parents in the hope of more relief rations.

However, Onek told reporters that there were other irregularities which are still being probed to ascertain their connection with the unaccounted refugees.

“The figure against which food was being distributed was higher than the actual figure. That is a statement of fact. The explanation given that 3,931 died, those can be clear, but others, although we have been told they returned to their countries, those aren’t definite,” Onek said.

“We have also witnessed other irregular activities which we think there is more tied to them in those figures,” he added although he could divulge details.

“We have given you these findings to correct our mistakes. If any foul play is discovered, the individuals involved will have to face the law”.

Regarding the fate of the officials in OPM who were suspended earlier this year, Onek said the said officials were not suspended only because of ‘inflation’ of refugee numbers but additional issues being investigated by the IGG and Police.

We are transparent and we shall continue to give you the facts as they are.

On his part, Joel Boutroue, the UNHCR Country Representative for Uganda said that the verification exercise will enhance efficiency in refugee management. He also said it will guard against double registration.

Despite the reduction in numbers, he said Uganda remains the largest refugee hosting country in Africa but that the refugee interventions remain severely unfunded. He appealed to partners and international community to do much more in assisting Uganda. 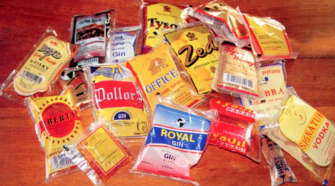 Legislators Push for Implementation of Ban on Alcohol Sachets