Tumukunde announced Tuesday that he had written to the Electoral Commission notifying them of his intention to consult ahead of 2021 presidential polls.

In his letter to the EC dated February 28, 2020, Tumukunde said, “My consultations will, therefore target various interest groups in the country, with a view of facilitating my decisions ahead of nominations of Presidential candidates slated for October 2020.”

However, Opondo has come out to say Tumukunde could be interested in the top job because of arrogance, false self-actualization and that the bid could be an attempt at a ‘business transaction.’

“It’s his right but l think he is doing it more because of arrogance, false self-actualization, and perhaps as a possible business transaction,” Government spokesman, Ofwono Opondo said Tuesday evening.

“Generals are appointed to lead armies, so, some of them falsely believe that they can lead under whatever circumstances. Let’s see this one but l doubt, basing on available public record and opinion, that he has what it takes to lead civilians and Uganda,” he said.

Tumukunde’s wishes are, however, that the other state agencies respect the mandate of the Electoral Commission.

“I pray that the statutory mandate of the EC shall be respected by other organs of the state, and that there will be harmony throughout this important constitutional exercise,” he said. 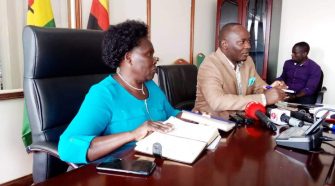