Government has Monday responded to recent claims by the body that brings together foreign news correspondents in Uganda accusing authorities in Uganda of blocking international journalists from accessing government accreditation.

In a statement released last week, the Foreign Correspondents’ Association of Uganda (FCAU) said that it has increasingly become difficult for reporters working with international news outlets to secure the mandatory accreditation from government.

“Since late August, at least 10 journalists wishing to report in Uganda have not been given government accreditation despite fulfilling all of the requirements and following the correct procedure,” the statement read in part.

They said that this curtails media freedoms which are already shrinking in Uganda.

FCAU noted that “preventing international journalists from working in Uganda adds to a troubling recent pattern of intimidation and violence against journalists”.

Now, government spokesperson, Ofwono Opondo has said that government has not banned foreign journalists from entering Uganda. He however added that some foreigners disguising as journalists have been blocked on grounds of either being foreign spies or deportees who have committed crimes.

Opondo who doubles as the Executive Director of Uganda Media Centre, the entity of government mandated by the Press and Journalist Act 1995 to issue accreditation cards to international journalists said that the accreditation of foreign reporters is a prerogative of government.

He said that while he has seen on social media a letter authored by Michael O’Hagan, the President of FCAU, regarding the concern of blocking foreign journalists, he (Michael) has not addressed the matter to him formally.

“Admission of any foreigner, granting them a visa or a licence that a journalist would require, is at a discretion of government of Uganda,” he said.

“If tomorrow I found that this person is not actually a journalist but an agent of a foreign spy agency, would you want me to put this on record?”

He said: “The government has taken the direction – that when a person who comes as a journalist, but through intelligence we get evidence that this person was deported for different crimes, we prefer to say ‘Sir or Madam, we can not give you accreditation’, rather than expose them”

Opondo said he had evidence in text messages where some of such individuals upon being denied entry in Uganda have pleaded with government not to disclose such information as it could jeopardize their chances of accessing other countries.

He said that the media was mendacious and tendentious in its reporting and that it lacked both discipline and balance.

Museveni said that government was going to deploy technical measures to fight this “sabotage”. 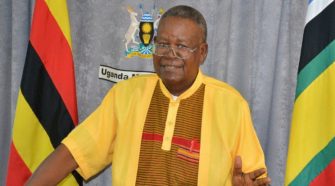 Conservationists Appeal for Protection of Primates Ahead of Continental Summit