Opondo said this while briefing reporters on the Cabinet resolutions from Monday’s Cabinet sitting.

“We have had several incidents where persons are coming here and disguising themselves as journalists when actually they are not,” Opondo told reporters at UMC.

“Some are fraudsters who have taken advantage of the laxity in our security, to sneak in here as journalists”.

He said that in other cases, the elements in question are actually journalists who are ill mannered. “They come here and exhibit misconduct – stealing phones and soliciting for facilitation”.

“They target the officials who come here to address the press and start soliciting money from them and asking for job opportunities in a way that is inappropriate,” Opondo said.

He says the Uganda Media Centre has not been aware that conduct such as extortion was going on.

The act of journalists soliciting for money is inappropriate, Opondo says, “since the assumption is that reporters are facilitated by their employers to go to the field and cover news events”.

As such, Opondo said that security screenings at UMC will henceforth be stringent as a way of curbing incidents of wrong elements gaining accessing the premises as well as preventing terror threats.

Uganda Media Centre is the government mouthpiece and is mandated to effectively facilitate communications of government policies, programmes and projects to the public through the media.

The centre provides media and communication services to government departments, generate information for dissemination to the public as well as ensuring that government is fairly and objectively represented in the media.

UMC serves as a platform where government officials address the media (both local and international) on government related programs and other issues of public interest. 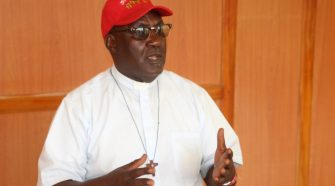