President Yoweri Museveni has scoffed at some leaders in the opposition that continue to fuel criminal activities which result in the deaths of Ugandans, warning that intimidation of Ugandans is unacceptable.

The President was commenting on the events that played out in Arua on Monday evening in which the Presidential motorcade came under attack by supporters of aspiring MP, Kassino Wadri. The chaos that broke out also left one person, Bobi Wine’s driver, Yasin Kawuma shot dead.

“I understand that some of our people were worried about the endless criminal acts of elements of the Opposition, including the incidents of Arua on Monday,” said Museveni in a statement on Wednesday.

“It is a big shame to have such confused people who want to use violence to intimidate Ugandans. Nobody has a right to intimidate any Ugandan by word or action,” he said.

He said that some leaders have been acting with impunity and it has caused the death of one in Bugiri and, now, one person in Arua.

“These acts are strongly rejected and will be punished according to the law. Anybody who organizes such groups is responsible for their misconduct,” he stated.

While some reports and witness accounts have attributed Yasin Kawuma’s death to shooting by the Presidential security unit (SFC), Museveni refutes this. He said that his security did not react to the attack even though they were armed with live bullets.

“Fortunately, my convoy did not react with fire in response to this attack,” said the President adding that “we were not equipped for anti-riots”.

Had his convoy reacted, Museveni said, the result could have been deaths. He confirmed that one of his cars which carries luggage had its rear glass window destroyed since it isn’t armored.

He accuses the same opposition supporters of attacking people who were coming from the NRM rally, and injuring a number of them with stones.

Museveni attributed the death of Kawuma to both the weak management by the Police and the criminal behaviour of some of the Opposition leaders.

He says that there should not be processions after campaign rallies, as such processions inconvenience the public.

“Why take supporters in processions through congested streets? The legal thing is to go for the rally at the agreed venue and, after the rally, everybody disperses to his/her home”.

A number of people including MPs Bobi Wine, Gerald Karuhanga, Paul Mwiru, Francis Zaake and their candidate in Arua Municipality by-election, Kassiano Wadri and former MP, Mike Mabikke have since been arrested in connection with Monday’s events. 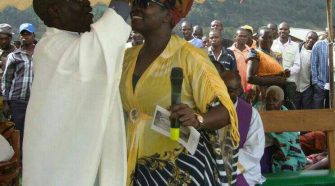