A day after Parliament passed the highly contentious Bill to remove the Presidential age limits, Members of Parliament in the opposition have vowed to embark on a campaign to challenge the amendments. They say they will not relent from exposing the illegalities that characterized the process of amending the constitution.

On Wednesday, MPs voted in favor of repealing the age limits from the constitution and also to extend the tenure of legislators and Local government leaders to two more years. Another clause was introduced to reinstate Presidential term limits which were scrapped in 2005.

But the Leader of Opposition, Winnie Kiiza together with other MPs that were against the Bill announced on Thursday that they will drag Parliament to court to challenge the new amendments. They have launched a campaign dubbed ‘Kojikuteko’ loosely translated as ‘Now that you have touched it [constitution]’.

They say the campaign is in the interest of Ugandans whose views on the Bill were ignored.

“We want to let Ugandans know that we played our part and now we are giving the ball to the citizens in a new campaign Kojikuteko on what follows now that the constitution has been tampered with,” Winnie Kiiza said at a press conference held at Parliament on Thursday.

“We have challenged this Bill right from the start and we have gone to court. Some of us have gone to the East African Court of Justice (EACJ) to report how the process is being conducted. We warned the Speaker but she ignored our calls,” she added.

Kiiza described the entire process of passing the amendments as fraudulent, accusing Speaker Rebecca Kadaga of abusing the correct procedures. She termed Wednesday, December 20, 2017 as a “black day” in the history of Parliament.

“We have all come to know that Museveni is not working for Ugandans. He has clearly said that he doesn’t work for Uganda. He works for himself,his children and his grandchildren,” Kiiza said.

The Leader of Opposition lauded MPs who looked beyond their personal interests and decided to act on behalf of their constituents.

Other opposition legilators like Manjiya county MP, John Baptist Nambeshe said that amendments demonstrated that the constitution has lost dignity.

After the declaration that the Bill had been passed, Buyaga West MP Barnabas Tinkasimire had hinted on seeking legal redress over some of the amendments, particularly the extension of the election of MPs by two years.

“We shall fall back and restrategize. We are going to court even to the level of Supreme court. We shall not be defrauded. It is evil and I can’t be proud of benefiting from this,” Tinkasimire said on Wednesday.

Odonga Otto (Aruu county) had faulted Ugandans for looking on as NRM abused the constitution. He said that citizens should have reinforced the small number of the opposition in Parliament by rallying at Parliament to protest the amendments. 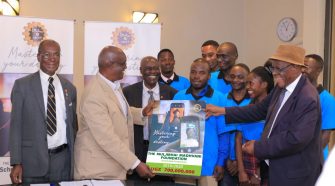