A total of 1,101 officers and militants of the Uganda People’s Defence Forces (UPDF) have been retired from the Force.

The Chief of Defence Forces Gen David Muhoozi officiated at the send off ceremony of over 500 officers and men of UPDF at the Land forces headquarters in Bombo on Thursday.

These were part of the 1,101 UPDF militants and officers that retired across the country.

The CDF commended the retirees and those discharged for their loyalty to service and advised them to use the expertise and rich knowledge they have obtained from UPDF to better their lives and those of their families.

Gen Muhoozi reminded retirees that a veteran affairs docket was created purposely to handle veteran issues, therefore they will not be abandoned.

“Make good use of the time on your hands and write memoirs that can be helpful to the ones still in service,” he said.

The CDF further thanked them for their distinguished service to the UPDF and their nation at large.

Col James Nambale who represented the Camp Commandant Brig. Hussein Addah presented a total of 518 soldiers to CDF for certification and official retiring of whom 123 are officers while 395 are militants.

He said all soldiers are candidates of retirement, although it is done in batches to allow them prepare.

The soldiers were advised  to uphold discipline and act as LC1 s in their respective areas.

Col Lawrence Kitts who spoke on behalf of all the retirees said he joined the army in 1965 and has been serving till todate.

He thanked the Commander in chief and the UPDF leadership for allowing them retire honorably and advised his fellow retirees to preach peace wherever they go.

The CDF later awarded all the retirees with certificates in the presence of the  Chief of Personnel and Administration (CPA) Brig George Igumba, the Chief of staff Land forces Brig Katsigazi among others. 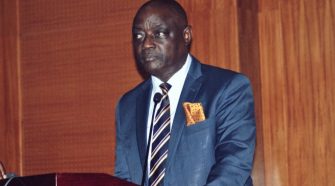