The ruling NRM party says it has not been surprised by the outcome of the voting process by Parliament on Wednesday afternoon regarding the removal of Presidential age limits from the constitution.

A majority of the MPs voted in favor of the repealing of the age limits, surpassing the mandatory two thirds quorum by law. 315 MPs supported the amendment while 97 voted against it and 2 abstained.

However, the surprise of the day came from the over 25 MPs from the ruling NRM party who voted against the position of their party.

They instead chose to vote basing on the views voiced by their electorates during the recent consultations on the Bill.

President Yoweri Museveni, the NRM Chairman is on record to have endorsed the amendment of the Article on age limits which he said was discriminatory.

In reaction to Wednesday’s events, the government chief whip, Ruth Nankabirwa said that all the NRM MPs that voted against the motion had informed her of their intentions except the Busia municipality MP, Geofrey Macho who had not approached her.

Nankabirwa also described the decision by Masindi district woman MP, Jalia Bintu to vote against the amendment as a surprise. 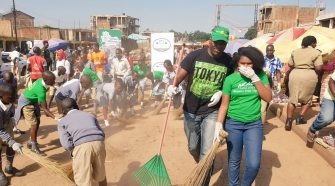