Over 64 percent of Ugandan households do not wash their hands with soap and water at critical junctures, the Uganda Water and Environment Sector Performance report of 2018 indicates.

The same study showed that hand washing wish soap has stagnated for the past decade with meager leaps of 1 percent increase annually.

The situation is even worse in schools where only 40 percent of schools in Uganda practice hand washing with soap. The Ministry of Health says this is why every year in Uganda, more than 35,000 children do not live to celebrate their fifth birthday because of malaria, diarrhea and pneumonia.

Government through the Ministry of Health is advocating for more hand washing with soaps as one of the mist effective means of preventing diarrhea diseases, along with safe stool disposal and safe and adequate household water supply.

Dr Olaro Charles, the Director of General Health Services in the Ministry of Health says that evidence has shown that improved hand washing can have a major impact on public health in any country by more than 40 percent.

The Uganda formative study of 2007 and UBOS census 2012 indicate that 97 percent of Uganda’s households have soap. However, soap is not widely used for hand washing but rather laundry, bathing and washing utensils.

This year’s Global Hand Washing Day which was commemorated on Tuesday was dedicated to increasing awareness and understanding about the importance of hand washing with soap as an affordable and effective way to prevent diseases and save lives.

This year’s theme focuses on leaving no one behind in hand washing advocacy. 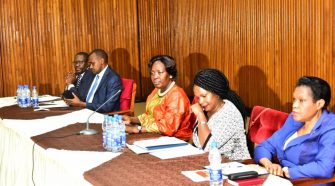