More than one third of Ebola cases in the East of the Democratic Republic of the Congo (DRC) are children, with one in 10 involving a child under five, UN children’s agency UNICEF said on Tuesday.

More than 225 people have died of the disease in North Kivu and Ituri provinces since its outbreak on August 1 this year.

“We are deeply concerned by the growing number of children confirmed to have contracted Ebola,” said UNICEF’s Regional Director for West and Central Africa, Marie-Pierre Poirier.

“The earlier children infected with Ebola receive treatment in a specialized health facility, the greater their chances of survival. Community mobilization and public awareness activities are also crucial to ensuring early detection and quick referral of suspected cases to Ebola treatment centres”.

Continued efforts are needed to raise awareness of prevention methods and promote early access to treatment which dramatically improves survival rates, she said.

She said the impact of the disease on children goes beyond those who have been infected.

“When parents or caregivers with the disease are taken to treatment centres or pass away, some children are left on their own. UNICEF and its partners have so far identified more than 400 children who have been orphaned or left unaccompanied because of the virus,” she said.

Marie-Pierre Poirier explained that the growing number of separated children is linked to the high caseload of patients in the Ebola treatment centres of Beni and Butembo, the current epicentres of the disease.

Together with its partners, UNICEF has opened a kindergarten next to the Ebola treatment centre of Beni to assist the youngest children whose parents are isolated in the centre. 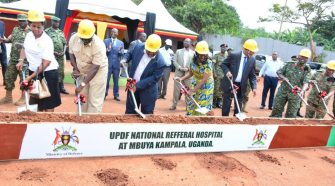